From Chekhov With Love 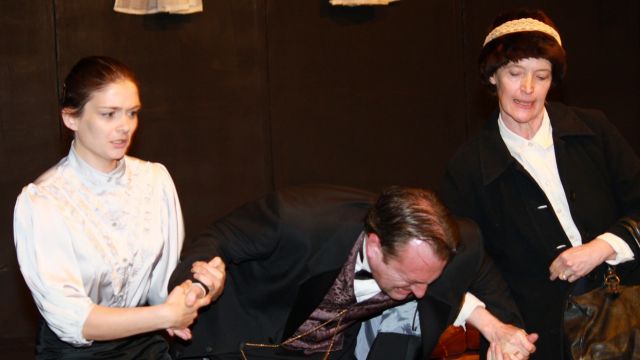 Love, lust, anger, attraction, confusion and more. From Chekhov with Love’consists of three short plays by Anton Chekhov. Having three plays on offer in one production is refreshing and delightful for audiences, as there is no time to get bored as a new story is always unfolding. This is a show for anyone who enjoys the tension and mild frustration of compromising situations, pantomimic elements and a touch of farce.

However, the first play, The Jubilee, slightly reminiscent of Are You Being Served in characterization, had me a little concerned as to what the overall standard of the evening would be. There were a couple of dropped lines, insecure accents and some prop elements which suggested ‘Am Dram’. There is a very fine line between clever over-the-top frivolity and silly. Certain details including no liquid in the glasses or decanters, can have the effect of looking like ‘props’ and ‘acting out’ when pretending to sip. This subtle detail can just lose the element of authenticity needed. Some of the costumes also seemed mis-matched with each other and the era. Lynden Jones was the stand-out performer in this piece, playing a flustered bank manager dealing with the interruptions and irritations in his office.

By the second and third play, the quality, direction and entertainment value really pick up. The Bear’follows the push-pull and tussle of two characters as they fight and yell, then slowly become spellbound by each other and end up falling in love by the end of the piece. I have seen this piece before and if performed well it is a real hoot. Sylvia Keays and Gavin Williams did not disappoint with excellent character shifts and comedic ability. Cast extremely well for these portrayals, Keays and Williams have great synergy and energy together.

Save the best to last, as the saying goes, rings true for the third play - The Proposal, about a landowner who comes to propose to his neighbour’s daughter, only to end up in a frightful rage with her over difference of opinions. The stand-out actor overall was the
ever-expressive, nuanced and thoroughly hysterical Laura Turner. Intrinsically and authentically in the part of this opinionated, indignant young woman, Turner delivers a superb performance.

These three plays are fun and funny, with elements of vaudeville and ‘panto’. The scripts, of course, are superb and the intimate, ‘down-home’ setting makes for a pleasurable evening of theatre even if it is a bit like you’re in you’re own lounge room being performed to. If you are a fan of Chekhov’s work, check this out - if flouncy frivolity just makes you cringe, give this a miss.