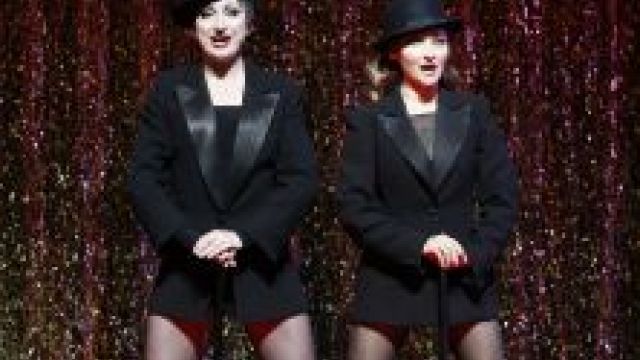 Chicago is back in town, and it’s vulgar, brassy, loud, and totally irresistible! Kander and Ebb’s vaudeville valentine of murder and celebrity in Chicago of the 20’s still delivers with all the theatrical razzle dazzle anyone could ever need. It’s ten years since Australian audiences first saw this Encores version of the show. Since that time it’s picked up a whole new legion of fans due to the 2002 Oscar winning movie. This new production is a knockout in every department. Heading the cast as the two merry murderesses are Caroline O’Connor as Velma Kelly and Sharon Millerchip as Roxie Hart. They’re great, and if O’Connor just slightly has the edge, it’s because she’s played the role on Broadway and Velma has the better songs. Who can go wrong with “All That Jazz,” one of the best ever Broadway opening numbers. Millerchip scores with “Me And My Baby,” which has the best dance routine in the show. Former soap heartthrob Craig McLachlan, plays the money-loving lawyer Billy Flynn. It’s McLachlan as we’ve never seen him before. Gone are the fishnet stockings of Rocky Horror, and the leather jacket of Grease, and in their place we have a genuine bonafide song and dance man. Whether fighting his way through a sea of feather fans in “All I Care About Is Love” or skipping his way through “Razzle Dazzle,” he makes the amoral Flynn a lovable cad. The fourth member of the star-studded killer cast is Gina Riley (Kim from TVs Kath & Kim), as Mama Morton, the keeper of the keys in the jailhouse. She belts every one of her numbers to the rafters, and doesn’t miss a laugh in the spare, but witty script. Damien Birmingham is a fine, if unsubtle “Mr. Cellophane,” and D.C. Harlock grabs every falsetto opportunity to make his mark as Mary Sunshine. Hard-working would be an understatement for the chorus. This group of long-legged chorines and buffed boys, wearing skin-tight sexy costumes, apart from playing assorted cameos throughout the piece, work their butts off in the dance routines which sizzle. The whole production would fall flat on its face without the work of the on-stage band (the brass section is smokin’ hot), and the superior lighting design of Broadway veteran Ken Billington. Producer John Frost already has two gigantic hits on the boards in Australia at the moment, Wicked and The Phantom Of The Opera. There’s no doubt Chicago will make it three.
Peter Pinne

Following the Brisbane season Chicago opens at the Lyric Theatre, Star City, Sydney, 14 May, 2009, and later in the year at Her Majesty’s Theatre, Melbourne, before touring to other cities.