The Christian Brothers by Ron Blair 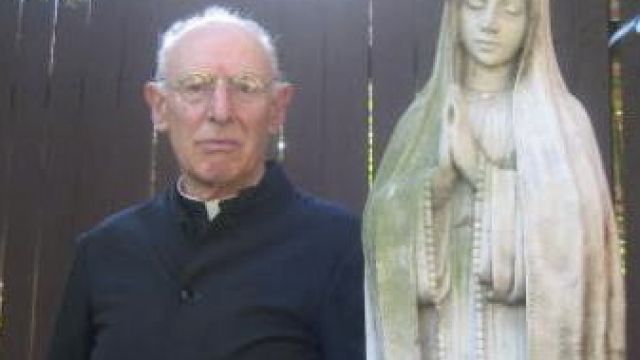 Gipsy Tap is currently presenting a revival of Ron Blair's classic 1975 one man play The Christian Brothers at the intimate Tap Gallery theatre, in a production directed by Richard Cotter.

In classic dramatic style Blair's play, set in the 1950's, features a central character at a point of crisis. The audience watches as a man of faith, an ageing secondary school teacher, the Christian Brother of the title, cruelly goes to pieces during the breadth of a school day.

As he unravels, the Christian Brother's mind flits manically between a vast array of subjects, in no particular order, from old school boys who never returned from war, to the importance of his students not advertising their faith for fear of retribution. The Brother's attention in the end always returns to an unfortunate student who forever torments him, and he takes to him with a leather belt with dire consequences.

Richard Cotter's production, this is his 25th production in the director's chair in a stellar fringe theatre career, serves Blair's fine play well. His production plays straight through, at just over an hour. The intermittent ringing of the school bell frames the production as the drama builds up to an ending that is just so sad.

Alan Faulkner reprises the role he first performed some years ago as part of the UK Manchester Festival. His versatile acting experience, from stints with the Royal Shakespeare Company at Stratford Upon Avon to his times touring regional New South Wales with a pantomime troupe, shows through. This is a sharp, focused performance that pulls at the heart strings as doubts creep into a life that has been so firmly built up around faith.

It was a performance that brought back memories of Meryl Streep's playing of Sister Aloysius Beauvier in John Patrick Shanley's play turned film Doubt, where doubts emerge in a character who holds the strongest of convictions.

Veteran designer Tony Youlden's simple period set worked effectively. Here is a Christian Brother bearing his tools of trade, his large chalkboard and desk, a statuette of the Virgin Mary, a map of the world, and a student chair sitting in the body of the stage.

This is an impressive production put together by a very experienced team. Gipsy Tap production of The Christian Brothers plays the Tap Gallery, Darlinghurst until December 6.