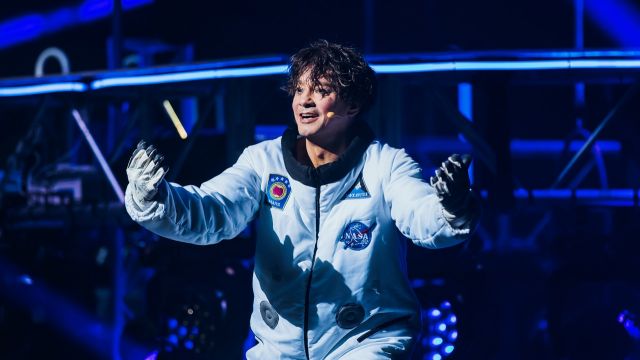 Circus is no longer just Circus! Technology has contemporised it, taken it out of travelling caravans and raised audiences’ expectations beyond the thrill of the daring performances to want more than the old “greatest show on earth”! They still want the thrills, but they want lights, sound – and even story – as well the action!

So, when the ‘big top’ is the Concert Hall of the Opera House, and there is an imaginative production team led by people like Simon Painter, Tim Lawson and Neil Dorward, the sky’s the limit – or the whole Stratosphere for that matter!

Taking the 50th anniversary of the lunar landing as their theme, they have built this year’s international acrobatic feats around the 1969 Apollo launch. They have incorporated the original recordings from NASA along with a barrage of LED lights and atmospheric digital sound to generate even greater tension than that created by the acts themselves. A DJ sits high on an octagon lighting loom that rises above the stage. Sixteen huge multicoloured spots provide a barrage of pin-point spots highlighting performances.

Stage crew in white space suits prologue each act. Dancers in white and silver assist others. Performers rise from a mist of swirling clouds to twist and contort on a hoop suspended from above; or rebound on bungee straps swinging from pulleys high in the curved ceiling under the opera house sails. Others emerge from the marching space crew to fly off an elasticised, trampoline rope held on the shoulders of fellow performers. The “clowns’ – Steve Capps, better known as Tape Face and Salvadore Salangsang (Sal) – choose ‘assistants’ from the audience to distract attention as cosmic stage-hands remove and replace equipment. Even clowning has changed to accommodate larger venues and compete with screen magicians and sit-com pranksters. Tape face relies on things such as big balloons and nerf-type guns. Sal uses what he finds at the venue – including the chords of the huge pipe organ, two timpani drums and the willing voices of the audience. An accomplished break dancer, he moves with rubbery precision, encouraging ‘volunteers’ from the audience to follow his sinewy moves.

In the glossy souvenir program, every act is re-titled with an astronautical theme. Anna Lewandowska on the LED ‘sphere’ cyr wheel is The Orbiter. Duo roller skaters Evgenii Isaev and Natalia Korzhukova are billed as Duo Velocity. Dmitry Makrushin and Oleg Bespalov, who demonstrate incredible strength and balance are The Galactus Gods. Hoop divers Nicolas-Yang Wang and Shengpeng Nie are Submergence; trapeze artist Oleg Spigin is The Cosmonaut and Wheel of Death dare-devils Roy Miller and Luis Romero are The Flyers Valencia.

Every act is prefaced by the continuing NASA broadcast, and in the lead up to Neil Armstrong’s first “small step for man”,  Felice Aguilar, the spinning Celestial Cyclone is wheeled in on a white lounge watching the landing on a small screen TV – as so many around the world did. As the tension quickens, she takes the stage on a spinning platform twisting and twirling in a rotating tribute to that “one giant leap for mankind”.

The lights are very bright; the sound is very loud; the effect is powerfully electric and all-consuming! It might not be everyone’s nostalgic ideal of what circus ‘used to be’, but it is circus as it is now – and will be. New equipment will lead performers to create even more daring and stunning feats. And their producers and directors will use whatever emerging new technologies are available to enhance the program and attract contemporary audiences – as those behind Cirque Stratosphere have done.