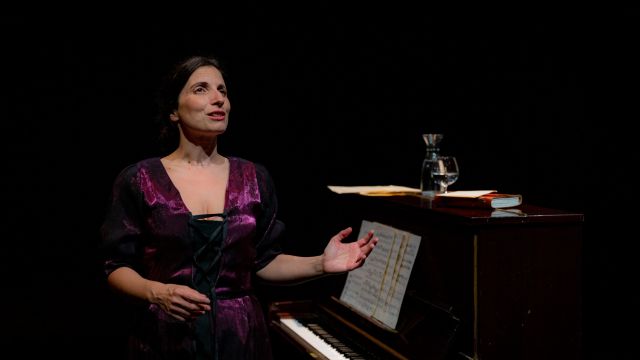 Clara is delightful.  Elena Mazzon is beguiling as Clara Schmann nee Wieck who lived from 1819 to 1896.  Mazzon spellbinds her audience in an unassuming yet totally centred manner.  She talks to us as Clara, imbuing her story, with an enchanting sense of wit and irony.

The performance commences with Mazzon, as Clara, expressing fraught anxiety over having received a letter inviting her ‘on a date’.  (This did have me wondering if ‘date’ was indeed a word used in the mid 19th century.)  In this early stage of the work there is a little audience interaction.  From thence the performance flows very nicely as an expose of Clara Schumann’s life before, after and with Robert Schumann.   We learn of her extraordinary capacity to birth seven children as well as work as a composer and tour as a concert pianist.  Her lust for love and life, and passion for composing, all being fruitfully expressed, seems astonishing for a woman of her era. 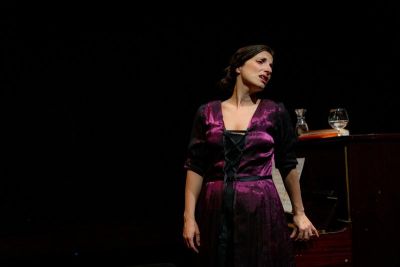 Despite the hormonal challenges, she speaks of the relief of miscarrying babies and yet seems to have maintained an almost super human libido.

There is a suggestion that Clara was shrewd and nimble enough to operate under the conventional radar of the male dominated social mores of the era.

Mazzon plays short musical pieces written by Clara and Robert Schumann as well as a piece by Johannes Brahms on an upright piano.  These interludes are delightful.  It would be so lovely if I small grand piano could be incorporated in the performance.

Nothing is out of place or unnecessary in this truly captivating solo performance.

A couple more shows to catch in this bafflingly short season.