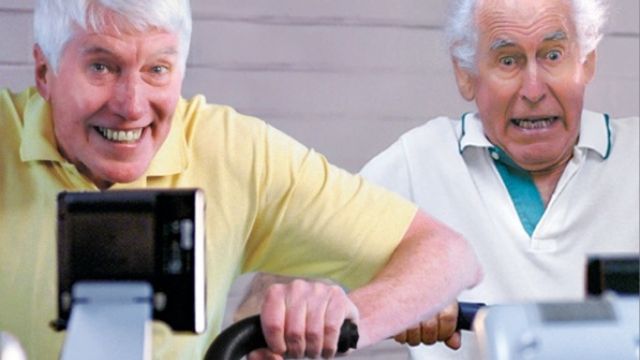 Set in Gerry’s Gym, this is the sometimes heartwarming, sometimes saddening but always poignant tale of five ex-military men and their weekly workout session. Starring Ronald Falk as Keith, Ron Haddrick as Jimmy, Edwin Hodgeman as Les, Russell Newman as Patrick and Shane Porteous as Rod, the five reminisce and cajole each other over an effortful work out consisting of lunges, marching, squats, coffee and Salada biscuits - usually retiring to the biscuits and coffee long before any workout has truly been undertaken! Each have their own troubles and fixed beliefs. Some have lost love, others merely worry for the future. But what they have in common is age, and each other. When Stanley (or Stan Lee as he is mistaken), a Malaysian Australian played by Jon Lam, joins the codgers in their gym routine one day, some true colours start to come through. The racist wartime views of the past live on in some of the codgers, and change does not come readily.
The set is clever, and functional, with lighting used well to move the piece around the stage. Sometimes the pace suffers a little, but each of the consumate performers delivers an outstanding and thoughtful performance, with special credit to Hodgeman for his hilarious physical comedy and great timing.
Through the codgers stories, some sad - but most hilarious, the audience may discover something about themselves, something about acceptance of others and being true to who you are. There are many revelations for our characters in this play, including the "coming out" of one, as a cross-dresser! But the overall message is clear. As spoken by Porteous, "...we are simply codgers, coinciding at the ends of our lives..." despite their varying opinions on money, politics, religion and race, "It's about being ourselves."
Paul Rodda