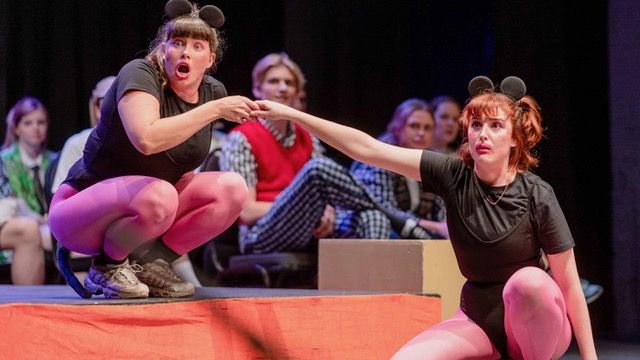 Colourful creativity! Terrific teamwork! Call it what you will. The Cranston Cup is the competitive culmination of weeks of impressive improvisation. Six teams strutting their stuff in sensational scenarios – simply scintillating!

Compere Harry Milas worked his usual magic on the crowd. Though the cards he used for the first round were a little bigger than those he usually shuffles, Milas set pace for a cracking final. With Rob Johnson timing and tallying and Tom Cardy hitting the keys to add a bit of atmosphere, impro aficionados Kate Coates, Liz Hovey and Wean Campbell took the judges’ seats.

The stage was set forYear 6 Formal, a team of students from Newington College, joined the competition, to pitt their prowess against the ‘age and experience’ of five more practised performers. Every team showed what Theatresports is all about: working together, listening, keeping the scene going … and having fun.

One Day from Retirement kicked off in the first round with a mime on the topic “Magician” (Funny that!), and Year 6 Formal ‘died in a minute’ at a French café. The Bald and the Beautiful used gibberish in a scene set at Sydney Trapeze, while We’re Cousins composed a pithy poem about a bible salesman. 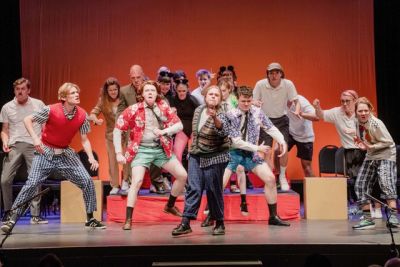 In round two, James Hill High built a time warp narrative around a cursed swamp and the Pash Rats built a first and last line challenge around a nerf gun. Things got a bit more frenetic in the third round. Year 6 Formal found some aliens at a dog track, We’re Cousins were cruel to a friend in a graveyard and the Pash Rats lampooned HSC Drama Group Performances on the topic of “cyberbullying”.

The final round saw some classic impro. We’re Cousins wowed the audience and the judges with an ‘epic’ on the strange topic “The Maddening Challenge of Bill” and The Bald and the Beautiful went all operatic with a dishwasher!

Highlights of the night – and there were many – were a very clever three-way Double Figures by James Hill High as theyovercame crippling anxiety at a house party…  and One Day from Retirement reminisced at a parent teacher meeting! 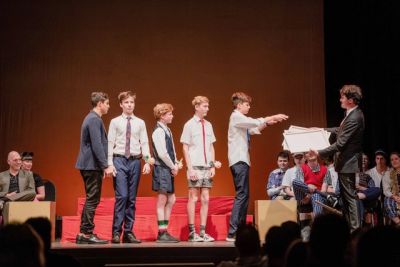 It was these two teams who finally shared the glory in a two-way triumph as the winners of the Cranston Cup for 2019.

Elliot Ulm, Reuben Ward & Tamara Smith and Theo Murray, Luke Tisher and Steph Ryan proudly accepted the two-metre-high trophy surrounded by their talented rivals. It was a great finale for a theatre event that has been inspiring Sydney audiences – and aspiring performers – for over 40 years.

Improvisation builds confidence, listening skills and the ability to work as a team as well as teaching acting skills. Check out the Impro Australia website to find out about courses, workshops, the Theatresports Schools Competition and all up-coming events including Celebrity Theatresports –  http://improaustralia.com.au/shows/