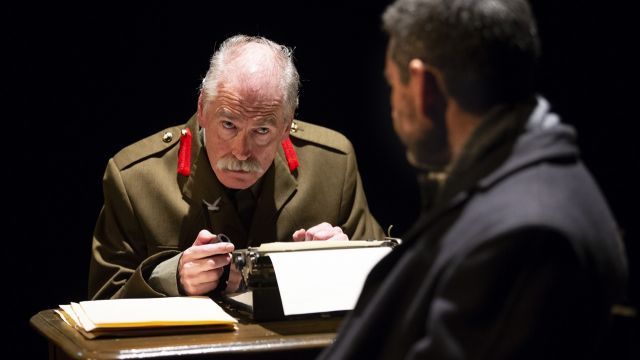 Collaborators is a black comedy based on the writer’s ‘magining of Russian writer Mikhail Bulgakov’s relationship with the tyrannical Soviet leader Joseph Stalin, who covered his ‘reign’ of terror and mass executions with a charismatic appeal that somehow inspired trust. Playwright John Hodge, of Trainspotting fame, tells the story through a dream the ailing Bulgakov has after a production of his play about the death of Moliere. In the ‘dream’, Stalin wilily encourages him to write a play about his early life, then takes over the writing himself.

Through the play, Hodge comments on the ruthlessness of Stalin’s reign of terror and artful deception, which he describes thus: “One of Stalin’s most effective tactics was the use of uncertainty. False reassurance and broken promises were a matter of policy at the highest level.” The devastation he wrought on the land and its people is the core of the play.

Hodge tempers the bleak theme with dark humour, short scenes and a mixture of styles. Director Moira Blumenthal and her creative team accentuate the satirical humour that interlaces the plot. The set, designed by Colleen Cook, is contiguous, with multiple entrances that allow the scenes to run smoothly into each other and encourage the pace that is needed to keep the production buoyant. Martin Kinnane lights it with a film noir smokiness that heightens the fantasy of Hodge’s imagined scenes. Cotter makes an energetic entrance and sustains it throughout the production. He lures Bulgakov into his magnetic web, mesmerising him with empty promises. Cotter’s fiendish smile, overt gestures, and crafty, quick responses expose the cunning and malice of the character – and explain people’s inability to resist his charm.

Andy Simpson plays Bulgakov as a naïve writer, caught up in his dreamy idealism – and thus an easy target for Stalin’s wiliness. He is foolishly trusting – exemplified when he allows Stalin to talk him into signing some execution orders.  He is also a loving husband to his wife Yelena, played with wry scepticism but unquestioning support by Audrey Blyde. And both are accepting hosts to a bereft group of displaced persons – played by Dave Kirkham, Annette van Roden and Michael Arvithis – with whom they are forced to share their home.

Just as these characters represent the beleaguered populace of Stalin’s Soviet Union, so David Woodland and John van Putten represent the dreaded secret police that carried out Stalin’s purges. One takes over the production of ‘the play’ Stalin is writing, the other hovers as a constant, evil presence, watching silently. Blumenthal emphasises the humorous possibilities in the script and uses stylised action to underscore the filmic nature of the writing. That, and the pace she demands of her cast, keeps the tone as light as possible considering the underlying themes and the representational characters Hodge created, including the masked, black gowned actors in Bulgakov’s Moliere-style play, eerily performed in a smokey haze.

This play is a reminder of just what destruction a duplicitous leader can achieve. Blumenthal’s production makes it scarily, but lightly, real.