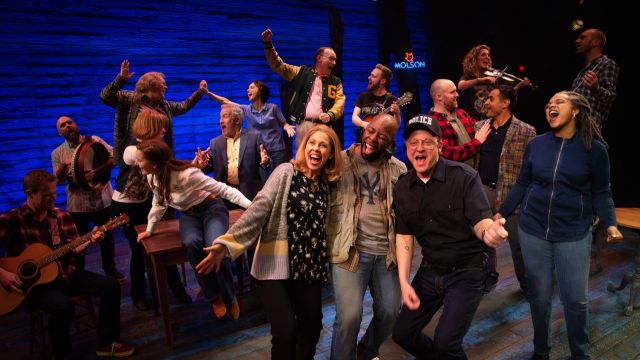 This extraordinary new musical is based on the real-life experience of the inhabitants of the tiny Newfoundland town of Gander.  Home to a once-massively-busy airport used for refuelling planes crossing the Atlantic, the townsfolk of Gander's "ordinary" day in the number "Welcome to the Rock!" (where we meet the mayor, the local policeman, the head of the local school and various other town stalwarts engaged in their daily morning ritual) in the first scene is thrown into chaos with the impending arrival of plane after plane diverted there after an "accident" has closed all American air space.  It is September 11th, 2001.

With only 12 vocal performers and seven musicians (playing a variety of instruments, with a heavy celtic influence and sound to give the sprawling cultural influence of Newfoundland its due), Come From Away uses its 75-minute run time to explore the intensity of the emotional journeys of both the people of Gander (and surrounding towns) and of the 7,000 passengers who descended on the town, all of whom needed to be housed, fed, clothed and diverted.  The local animal welfare expert battled her way into the planes to care for the forgotten animals in the holds as well.  Watching the town characters swing deftly and determinedly into action was one of the pleasures in this musical; and then seeing them also pull seamless double-duty as bewildered, angry and frightened passengers and flight crew was another. (Indeed in the program, each performer has a character name "and others" listed against their name!) The new local reporter narrates the passage of time, popping up with updates to set the scene, never allowing that feeling of incredulous energy fused with frantic worry to fade; and various other characters also perform small vignettes, gleaned from thousands of hours of interviews with the real people these characters represent.  The resulting level of detail, and the dozens of tiny, powerful moments, all of which land perfectly with a rapt audience, are the payoffs of all this effort in Come From Away.

Although this is a musical, and although there was an excellent score delivered by accomplished musicians with wonderful songs such as “Welcome to the Rock” (which opens and closes the show), “Me and the Sky” (a wonderful ode by Zoe Gertz as Beverley, captain of one of the planes, about her journey to become a pilot), the boisterously fun "Screech In" led by the Mayor Claude (Richard Piper is marvellously solid as the many mayors of the small towns scattered around Gander); and the intensely-moving, multifaith and multilayered "The Prayer", the primary focus of Come From Away is story, as the characters were swept along by the extraordinary circumstances of that week, suddenly thrust into a new reality by September 11, coming to terms with their own changed lives even if those lives were suspended.

The musical does not shy away from the emotional turbulence of frightened, desperately worried people stuck "On the Edge".  But laced throughout is a brimming sense of warm humanity, acceptance (one of the best jokes of the night is delivered faultlessly by Richard Piper on the Newfoundland take on diversity) and joy of life in the midst of tragedy.  The "come from away" passengers are both heartened and bewildered by the overwhelming generosity of the people of Gander.  One of the refrains from the Newfoundlanders is "oh you'd do the same!"; and it clearly shows on the faces of some of the passengers that they have to ask themselves: but would they have?

It's one more element in a heady mix of theatre. The sets, lighting and costumes were simple, but ingenious in their versatility, allowing the performers to produce seamless staging, shifting from planes, to the school, to buses, to the cafe and bar, even to a platform overlooking a waterfall, and back again.  The musical ensemble was clearly visible upstage, but simply part of the proceedings. There is no interval, and the show is stronger for it, barreling the audience along in its momentum, with not a wasted moment, odd note or slipped accent.

I saw many of my fellow theatre-goers wiping away tears throughout the performance; at the conclusion of the final chorus the audience roared to life, and was on its feet in the space of a minute.  If you can get tickets, go!

Read more about Come From Away - Michael Brindley's feature article.