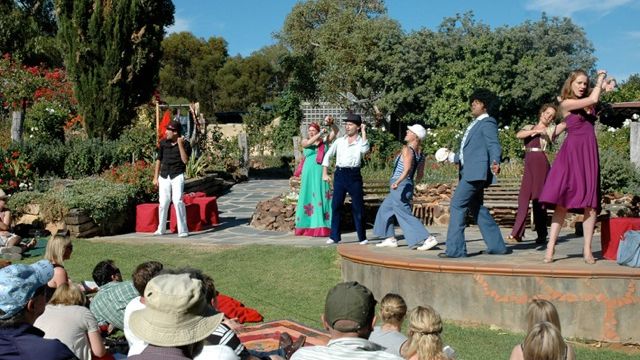 Returning to the picturesque setting of Coriole Winery in the McLaren Vale, Essential Theatre’s production of Shakespeare’s The Comedy of Errors couldn’t have asked for a better day.

Now in its eighth year, the touring company presented one of the playwright’s earliest comedies for their 2009 season. The Comedy of Errors is the tale of two sets of twins separated at birth, and the chaotic events surrounding their accidental reunion as adults. The story contains all of the classic Shakespearean themes of tragedy, mistaken identity, witchcraft and love.

The performance opened with a rendition of Funky Town, sung by an all 70’s costumed cast. A talented and tight group, the Essential Theatre production was energetic and funny. With only a few props the cast effectively set the scene and sound effects contributed by offstage cast members were clever, and often hilarious.

The cast delivers a strong ensemble production, with standout performances by Sophie Lampel as Dromio, a crowd favourite, and Jamie McDonald as Antipholus. Impressively, both actors played the roles of each twin. This could have been confusing for the audience, but both rose to the challenge, switching seamlessly from one to the other.

Other great performances came from Grant Durham as Duke / Solinus/ Balthazar / Ricardo, whose Ali G like interpretation of Balthazar was highly entertaining. Miranda McGee played the Courtesan beautifully and her audience interaction was hilarious.

The Comedy of Errors had impeccable timing and was brilliantly performed by the Essential Theatre cast, a combination that could win over even the most novice Shakespearean.