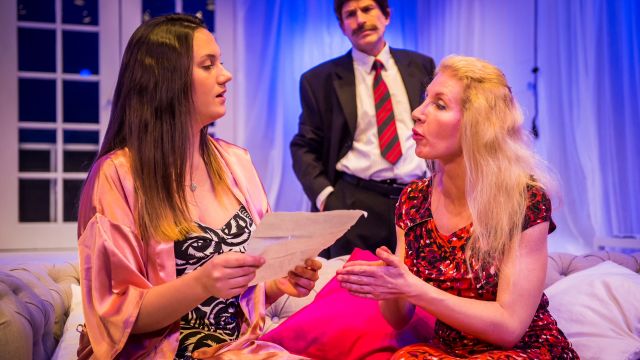 Staging a play that involves a hotel room in a 40-year time warp is obviously no problem for director, set and sound designer Bernard Teuben. With special lighting effects by Sean Churchward, he has transported Ayckbourn’s 1994 play into the 2038 suite of the Regal Hotel, London, complete with a frosted glass bathroom and a communicating door that, like a neon-lit Tardis, carries its passengers back to 2018 and 1998.

In a tussle with Poopay, Reece collapses, Julian returns, they carry Reece into the bedroom, and Poopay realises that Julian is the murderer Reece has described. A chase ensues and Poopay runs through a communicating door to be carried back to 2018, where she meets Ruella (Margaret Moir), Reece’s second wife, the night before she is due to be thrown off the balcony by Julian. And that’s just the beginning! Things get even more complicated when Ruella is time-warped to 1998 and tries to convince Reece’s first wife, Jessica (Jodie Klopf), on their wedding night, of her forth-coming murder. Hotel security man Harold Palmer (Larry Murphy) provides the typical Ayckbourn comic relief as the action gets faster and innuendos abound.

This is one of Ayckbourn’s more complex plays – and one where, as Teuben explains in his program notes, “the women are not the dim-witted, panic-stricken lasses often portrayed, but strong-willed characters taking chances and changing destinies.” A timely revival then!

Chambers is stunning in leather and boots, taking her character from posing prostitute to frightened victim, to concerned rewriter-of-history, in a confident, believable performance. Her pace and energy are integral to much of the action.

Snars ages carefully into the part of seventy-odd Reece, a bit stumbly, a bit shaky, but doggedly determined that the murderer be exposed. Where the character is 40 years younger – cavorting with Klopf on their wedding night – it’s his practised comic timing that makes the age change work. Moir makes the character of Ruella her own, creating a self-disciplined, intelligent woman of the twenty-first century. Her Ruella takes charge of situations, thinks outside the square and uses her initiative to find a way to convince Jessica of her forthcoming fate.

As Jessica, Klopf plays the young twenty-something new wife of the 1990s with appropriate honeymoon naivety, maturing to conniving cunning in the final scenes of the play.

Rowe and Murphy are the wicked and whacky bookends of the action. Rowe is sneeringly malevolent as the cruel Julian, and Murphy revels in the officious, farcical antics of Harold. Both provide the perfect foils for the much wiser women they encounter through the years.

With thrills, laughs and some unexpected twists, this production has something to please everyone.