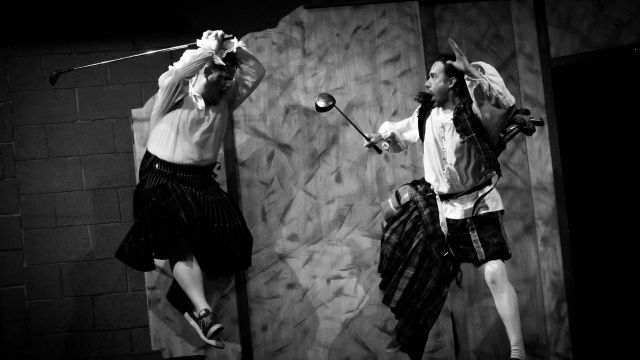 It's great to see Brisbane Arts Theatre tackling even more adventurous shows after all those many wonderful years of contributing to the rise in the arts and theatre in Brisbane, and I was happy to revisit a show I enjoyed seeing many years ago at the Criterion Theatre in London. What follows is therefore partly based on this initial viewing and the fact that I was able to see only the first act due to an on-going assignment.

Not having seen the original draft of the script, I’m not aware how much flexibility the writers have incorporated in the text. I mention this because this is a very different version of the original I saw in London mainly because of the bulk of Australian and topical references made and the lack of theatrical timing so important when presenting comedy. Particularly with Shakespeare.

These two famous and intricate theatrical foundations, comedy and Shakespeare, need study and work and it would have helped if the actors were in fact more Shakespearian in flavour and the direction more in tune with the essence of farce. The cast certainly pushed the panic button to its extreme, having to incorporate all of Shakespeare’s works into two hours or so, but a breath every now and then is important to keep the comedy flowing as is the art of knowing your audience when using improvisation. I sensed the show would have worked better by sticking more to the script, what I don’t know of it(!), and adding the various anecdotal outtakes more sporadically and with a little more subtlety, where possible, even if not always possible, banality being, of course, a miniscule part of the Bard’s observation of the complexities of human nature.

Still, the cast kept the action going and kept the audiences' attention and they certainly pushed the panic button hard enough, if not too much, to incorporate all of Shakespeare's works into two hours or so.

Congratulations to cast members Rita Artmann, Rob Griffith, a Mr Debonair Shakespearian in-the-making, and Nathan Lamenter for his unabashed foray into multi-dimensional personalities. Their work was full of energy, enthusiasm and a ‘bloody' good time …...