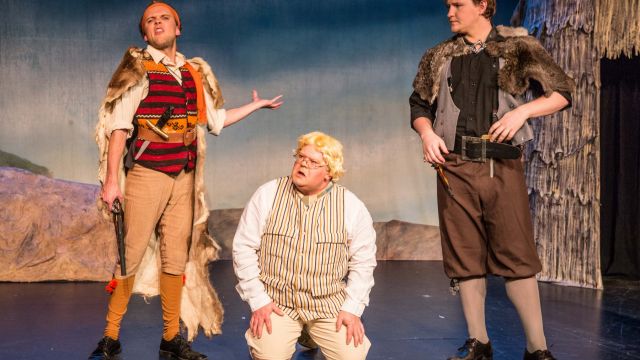 I wasn’t sure what to expect, with The Gilbert and Sullivan Society performing, in a smaller auditorium in outer suburban Melbourne, a work I’d never heard of and a verismo opera well outside their usual fare with a keyboard and string quartet. It was surprisingly good.

The Contrabandista is a farce by Burnard and Sullivan, who wrote Cox and Box. It was not an undiscovered masterpiece, but under the expert direction of Adrian Glaubert, highly entertaining. This was mainly to do with the strength of the performers.

Rita, played by Leonie Thomson, was the kidnapped English fiancée of Count Vanquez, played by Austin Moore, who is attempting to rescue her and has killed the brigands’ leader. Leonie had a couple of lovely solos which she sang well, though sometimes losing support in the soft singing. Austin didn’t have as much to do, but worked well with Leonie.

Andrew McGrail, a G&S regular, was the hapless Englishman, Mr Grigg, captured by brigands in the Spanish mountains, and preordained to marry the newly widowed Inez. He was very funny and sang extraordinarily well.

As the two leaders of the opposing halves of the brigand band, Henry Shaw and Luke Belle were suitably over the top and had attractive, clean baritone voices. Veteran Jenny Wakefield was a strong Inez. It was a highly entertaining presentation.

Cavalleria Rusticana was a totally different experience. Although it was in English, I was surprised the translation had not been updated, as it was very stilted with “thee”s and “thou”s. The small stage was dominated by an impressive church entrance.

The outstanding talent was young Stephen Marsh as the wronged husband, Alfio. I have watched his development over a number of years now, and this is his best performance to date. The voice is strong and unfailingly beautiful, and his acting was strong. 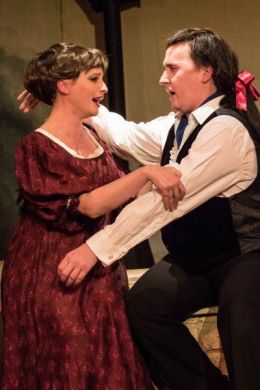 It was quite a coup to have a Santuzza who was seven months pregnant – very appropriate. Unfortunately this probably restricted her diaphragm, and Lydia Sherren didn’t have the full tone one would expect from a soprano singing this role. However, she more than made up for this with her acting, which was strong and passionate.

It was the opposite with her Turridu. I have seen James Penn on a number of occasions and never heard his voice in better form, ringing out confidently. Unfortunately, his acting is still very rudimentary, which makes it hard for his partners.

I haven’t heard the Mamma Lucia, Lisa Lally, before, and was impressed with her big mezzo voice. Bianca Majchrzak was a slim and gorgeous Lola, though I felt it was a mistake to have her openingly flirting with Turridu in front of the townspeople.

The chorus singing was strong and the Easter Hymn was a highlight. Instead of a double chorus they had one soprano singing the second chorus, but that worked well. There were a number of children on stage, all singing lustily.

The small band did very well, and I only occasionally noticed the lack of body in the sound during the opera. This was a highly entertaining evening.