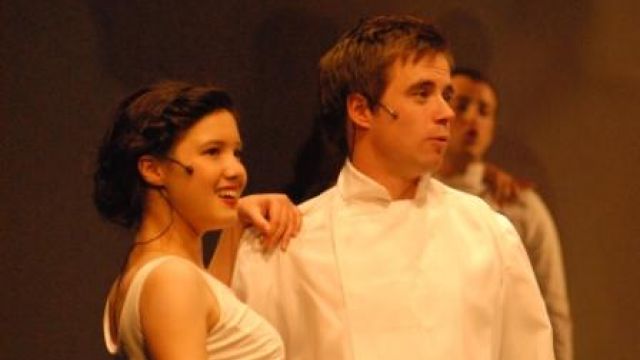 “Her name was Lola,” and yes, it’s true, “she was a showgirl”, and she was gorgeous! The Hobart Repertory Theatre production of Barry Manilow’s Copacabana, a musical theatre extravaganza, had all the right ingredients: music, singing and dancing, lights, costumes, sequins, fun and laughter. The proof of a successful production must be the number of people singing after the show. The signature tune, the only original, of course featured in the after-show singing. All of the other songs were written in the style of the period, 1940’s nightclub scene. I saw the production twice: opening night and the penultimate show, and was pleased to see and hear that the first night jitters and problems with microphone levels were overcome.

Copacabana is an idea that grew. Taken from Manilow’s 1978 monster hit song, Copacabana is set in a New York City nightclub, and tells the story of a pair of star-crossed lovers: Lola, a showgirl at the club, her lover Tony, and the diamond-wearing mobster, Rico, who destroys their happiness. In 1985, Manilow and collaborators Bruce Sussman and Jack Feldman expanded the song into a full length, made-for-television musical also called Copacabana, writing many additional songs and expanding the plot suggested by the song. The stage-show version followed, and has justified Manilow’s vision and dream. Band leader Ian Williams and the superb band in the Hobart production gave full credit to Manilow’s catchy music.

Director Patricia Kempa worked magic with the cast of talented newcomers and seasoned performers. Although there was a range of experience and talent on stage, no one shirked on energy, drive or commitment. Ella Burns (Lola La Mar/Samantha) was delightful. Her talent and natural charm are evident: I’m sure she has a huge future ahead. Billy Barnard (Tony Forte/Stephen) is another terrific talent. On opening night his microphone levels were all over the show: although young, his “stage trooper” ability kept him on track. This level of professionalism was a big part of the production, due to the expertise of director Kempa and excellent choreography by Angela Ireson. The first dance routine by the Copa Boys ensemble was terrific. Although there was a wide range of experience and skill, the dancing teams were rehearsed, well drilled and ready for action.

The more experienced cast members: Stuart Pearce (Rico), Kerri-Louise Hooper (Conchita), Chelle Burtt (Gladys Murphy) and Richard Kowaluk (Sam Silver) showed their performance skills and leadership: the young cast has benefited from the mentorship of the seasoned performers. In evidence throughout was a delight in performing and strong engagement with the audience, which engaged right-back-at-them. Feel-good productions are worth their weight in gold: Well done crew – a great night out. “At the Copa, Copacabana, where music and passion is always in fashion…!”