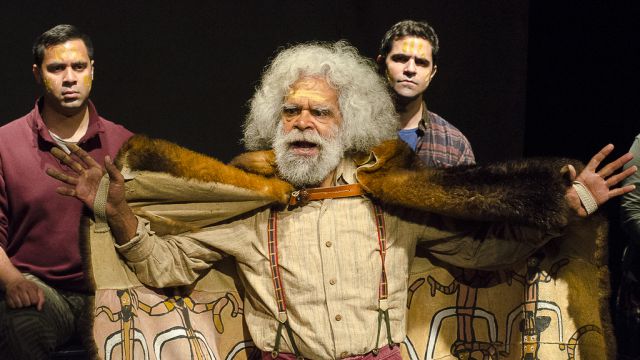 Coranderrk Aboriginal station was a settlement that was self-managed from 1863 to 1924 by members of the Kulin clans, under the leadership of Wonga and William Barak. There was a government inquiry into the management and future of the settlement in 1881. The original production premiered at La Mama in November 2011 and was entirely based upon the testimony given at that inquiry. This new production at Belvoir has additional dialogue added to enhance the dramatic narrative of the work. This production is an extremely important public revelation of an important event in Australian history. A moral of the tale flows from considering; what if this experiment had succeeded longer term and what if there had been many more settlements like this one? Then would the situation of indigenous Australians be different today?

This is an extremely interesting and little known story, but not a particularly theatrical production. In fact, the production feels more like an illustrated lecture, rather than a piece of theatre. It’s really a group PowerPoint presentation with little interaction between the players or the characters featured in this story. Jack Charles is extraordinarily powerful playing William Barak and the Songman, but many of the cast fail to deliver this level of interest and attraction.

The stage is brightly lit, a screen is unfurled behind the line of actors and photographs of the historic characters, together with maps and other images, are projected upon this screen. The production runs about one hour. The audience exploded at the end and tumultuous applause brought on several sets of bows. But important as it was to stage this work, some greater level of theatrical presentation would have greatly enhanced the experience.