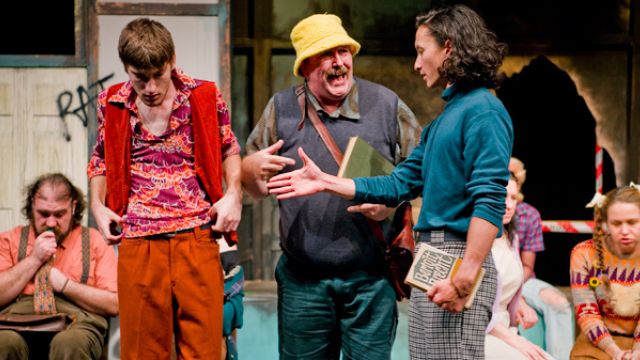 Lewis (Martin Fatmaja Hoggart), a budding stage director, through advocacy by earnest social worker Justin (John Lombard), contracts to work with a group of asylum inpatients suffering a variety of mental health issues, in producing a play. He envisages a quiet one-act play, but, immediately out of his depth, is bulldozed by manic-depressive Roy (Chris Baldock) into attempting Mozart’s opera Così Fan Tutte.

But Lewis must work with his actors’ various needs and limitations, including food obsession, obsessive–compulsiveness, drug dependency, post-traumatic stress, pharmaceutical sensitivity, and pyromania. And none of the opera-cum-play’s cast can sing. So the production becomes increasingly unrecognisable.

Adding to the pressure on him, his girlfriend and his friend demand that Lewis pay more attention to the wider world’s sociopolitical crisis, the Vietnam War, than to his difficulties in the asylum.

Così is both insightful and challenging, chiefly in the considerable depth of understanding of mental illness it requires in order to reveal its inner workings believably, sympathetically, and subtly.  On preview night, much of that subtlety suffered from the all-too-common mistake of needless exaggeration, unintentionally caricaturing outer appearance rather than express inner disturbance. Less would definitely be more. Notably, though, Max Gambale’s portrayal of the traumatised Henry evoked Henry’s inner state, and Isobel Williams’s matter-of-factly drug-using Julie was rewardingly understated.

The set, a convincingly burnt-out theatre conveying perfectly the grime and carelessness that, in 1971, officialdom deemed suitable for institutional inmates and the dearth of funding for promoting well-being through art, is the perfect backdrop to a story of mingled hope and despair. Its lighting was terrific, as audiences have come to expect from REP; the various costumes interestingly reflected their wearers’ personalities; and the soundtrack enhanced the action superbly. Over several performances, that action should dial down to better embody its intent.