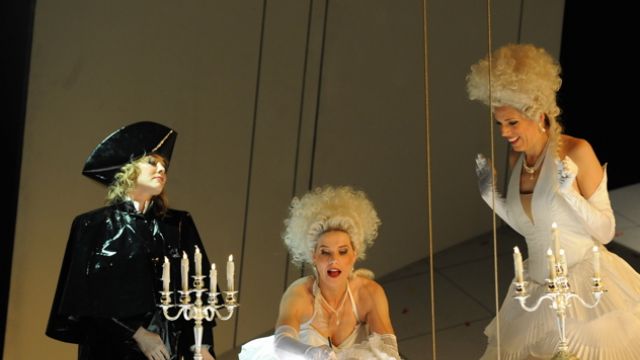 Jim Sharman’s vibrant new production makes Mozart’s Cosi fan tutte about as young and sexy as possible.
The libretto, however, is pretty misogynistic and politically incorrect by current standards. The idea that boys can behave badly to test the faithfulness of their lovers is rooted in the past.
But the magic of Mozart, and Jim Sharman’s theatrical panache, tend to win the day for opera audiences.
The costumes (Gabriela Tylesova) are stunning and relatively contemporary, against a setting (Ralph Myers) both engagingly and effectively neutral. The two pairs of lovers are boldly, and surprisingly, attired for their first appearances. The guys, stripped to the waist after a gym session, though only one really has the right physique, while the women, in one-piece bathing suits, look stunning.
A bride and groom watch the proceedings, providing an attractive dramatic frame, whilst effectively engaging with the opera’s subtitle, The School for Lovers.
Sharman adds a multi-media dimension, with a mobile cameraman capturing key detail, with audience focus drawn to their instantaneous video projection.
The singing, universally, and the acting, mostly, of the principals Ferrando (Henry Choo), Guglielmo (Shane Lowrencev), Dorabella (Sian Pendry) and Fiordiligi (Rachelle Durkin), the agent provocateur Don Alfonso (Jose Carbo) and his scheming accomplice Despina (Tiffany Speight) – is wonderful.
Freshly envisaged, and beautifully packaged, Cosi fan tutte is a real audience pleaser.
Neil Litchfield