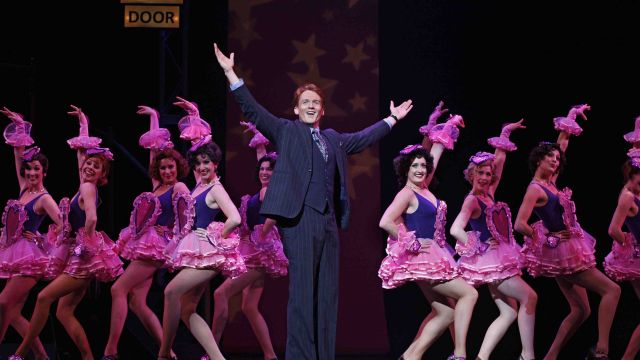 The Production Company specializes in concert performances of lesser know music theatre with professionals and a short sharp rehearsal period. Crazy for You fitted the bill nicely being a rehash of Gershwin’s 1930 musical Girl Crazy. I was surprised there were so many familiar songs, until I learnt that of the twenty songs included, only four were from Girl Crazy. Of course three of these were “Embraceable You”, “I Got Rhythm” and “But Not For Me”.

Being a concert performance the orchestra was on stage, but a bar was pushed on stage by the actors and chairs were moved on and off, so it wasn’t hard to work out where the action was happening.

And there was plenty of that.

This was a dancing show and there was more than enough to satisfy the audience. It was superb and as it was a professional show everyone had to dance, and the routines were exciting and very tight. The voices were equally good.

Chris Parker, whom I encountered in The Thing About Men, played the lead role of Bobby Child and displayed a confident stage manner, lovely easy singing voice and was a good mover. Natalie O’Donnell was the diminutive Polly Baker and brought some real pathos to this role, though the show is generally light weight. Natalie also had a very good, versatile singing voice, and the two made an engaging couple, though Natalie struggled with some of the top notes in “I Got Rhythm”.

Bobby’s long suffering fiancée was played by Chloe Dallimore, who was very funny. Special mention should be made of Casey Gould, Jeremy Powell and Ben Brown, who formed a barbershop trio with some lovely harmony singing. Christopher Horsey also stood out as the gun-happy barman.

The story revolves around banker Billy, who wants to be a performer, being forced to go up country to foreclose on a theatre run by Polly. Polly won’t have anything to do with him, so he impersonates the producer Bela Zanger and gets his dancing girls, on holidays at the time, to come up to do a show to save the theatre.

Of course Polly falls in love with him as Bela and things get complicated when the real Bela, Adam Murphy, turns up. The two perform a wonderful duet as drunks mirroring each other.

Everything turns out fine in the end and the enthusiastic audience loved every minute of it.