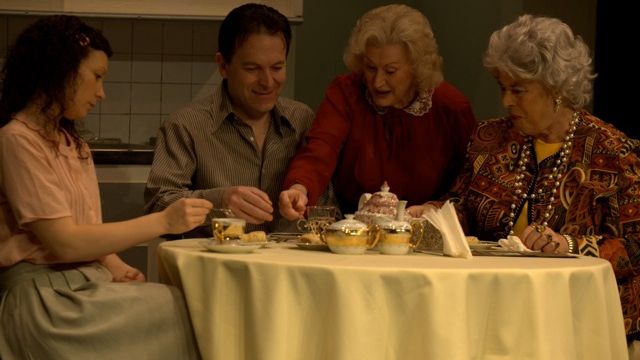 Crossing Delancey, a romantic comedy about Isabelle, who works in a New York Bookshop, the men in her life, her grandmother, and a matchmaker, plays out on an effective three section set, representing a kitchen, a park and the bookshop where Isabelle works.

Becky Lee handled the role of Isabelle well, in a warm engaging performance, sharing a good rapport with Patricia McCracken as her grandmother Bubbie. The only fault, minor in respect of the story, was Becky’s initial outfit, which was far too bland for a contemporary New York girl in her own apartment.

Patricia McCracken captured the character of the Jewish grandmother Bubbie, very much caught up in cultural traditions, with finesse. She sustained the accent well, though perhaps there was a little too much wringing of the hands in an otherwise a high-quality performance. The contrast between the two was credible and funny, balancing, as it did, the traditional and the modern outlooks.

Janet Withers captured the essence of Hannah, the annoying matchmaker, reminiscent of Yente in Fiddler on the Roof, and overly fond of eating, much to the enjoyment of the audience.

Then there are the two men in Isabelle’s life.

Isabelle’s dream man, Tyler, an author who visited the book shop regularly to find out how his book was selling, oblivious to the fact that Isabelle is interested in him romantically, was given a good performance by Frank Shrever, who displayed strong stage presence.

They feature in a terrific dream sequence, well enhanced by effective lighting.

Also interested in Isabelle is Sam. He has inherited a pickle shop, but also has a strong interest in literature, but initially she can’t see past the smell of pickle. Ian Johnson gives a professional performance of the quiet young man who did have more going for him than Isabelle initially realised.

In the end, ironically the matchmaker comes up with the right guy.

The company used the sets to full advantage moving fluidly from one scene to another.

Crossing Delancey is just the type of enjoyable evening of theatre which audiences have come to expect from The 1812 Theatre. 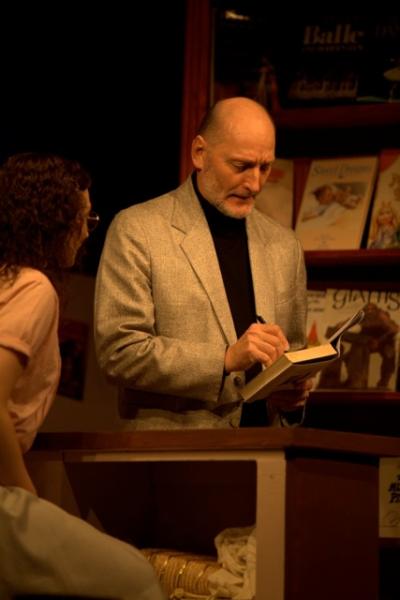