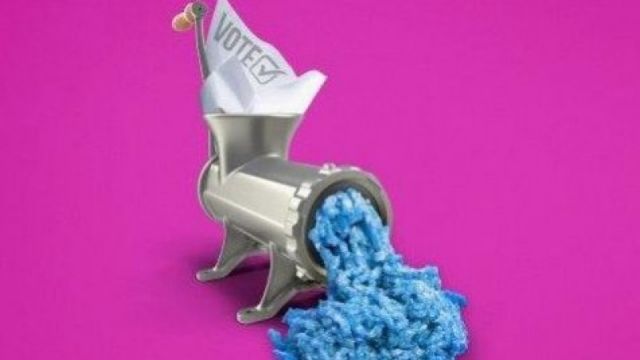 Our audience - or participants – are strictly limited to twelve.  We soon see why.  This is definitely an ‘audience participation’ show – or presentation – or ‘experience’.  Without our participation, nothing would happen.  But it’s not that embarrassment-in-the-front-row kind of participation. The twelve people sit around a large dinner table.  Classical music plays: Chopin, Beethoven, etc.  We don’t quite know what to expect.  A ‘table cloth’ with fleur-de-lis pattern is projected onto the table.  We get an idea of how things will go when the table cloth ripples and is taken away (electronically), and a box is projected in front of each of us containing three options - tap water, bottled water or sparkling water.  We are asked – by a brisk female voice from a PA system – to place our ‘tick’ counter on our choice.  That is, we ‘vote’ for our choice of water.  I vote ‘tap water’, but the majority vote ‘sparkling’, so sparkling it is.  The vote for red wine is unanimous.  And so it goes.  A ‘chef’ – not a real chef but supposedly an ‘authority figure’ of some sort - is in the adjoining kitchen with a tall white hat.  We see him (on another night it could be her) via video link.  There is an assistant.  He will have to cook up whatever ingredients the majority chooses.

There are five courses: hors d’oeuvres, appetiser, entrée, main course and dessert.  For each course, we get a list of around twelve quite arbitrary ingredients and these are broken down into groups of three – say, chilli, corn chips, cauliflower - and we vote.  We try to figure out combinations that might be edible, but majority choice wins.  The selection is then given to the ‘chef’ who has a brief time to whip up these ingredients into something edible.  While we wait, the Voice goes around the table, asking us questions about the process, each other and our choices.  We’re asked if we could do a better job than the chef.  On consideration, we say no.  We check in on the chef’s progress.  We also vote on the ingredients for the next course.

Our harassed chef remains cheerful and, amazingly, produces quite edible morsels for each.  These morsels are then served – and very correctly too: serve from the right, clear from the left.  As each course is brought in, the music switches to a Michael Nyman feel – The Cook, the Thief, His Wife and Her Lover sort of thing.  And we vote on the success or otherwise of the chef’s work: good, okay, bad.

It is all ingenious, intricate and just about flawlessly realised – the only tiny glitches were when someone’s vote didn’t register.  Christine Felmingham is responsible for the technical design, Mike Willmett the sound.  Clinton Freeman designed the software and the visuals are by Sean Dowling.  The set and the ‘contraptions’ are by John Felmingham.  Mr Sibthorpe had some collaborators too: Cam Clark, Toby Martin and Craig Wilkinson.

The metaphor – or analogy, if you will – is clear and we get it.  By the end, we’re discussing the flaws and merits of democracy.  The majority sends their choices to the ‘chef’, who then has to make the best of what she/he gets – and then serve it up to us – and if a minority group (say with lactose intolerance, as it were) misses out, tough luck.

The whole process stretches over nearly two hours.  It’s clever, but its cleverness and the obvious ‘point’ risk it all being eventually a bit… tedious.  It is fun, but how much fun depends, once you’re over the ingenuity, on the interactions of the participants: do they connect, bounce off each other, make good jokes and clever food choices?  It that happens, Crunch Time is a good way to spend a couple of hours.  Go with friends and hope there’s a foodie on the table.