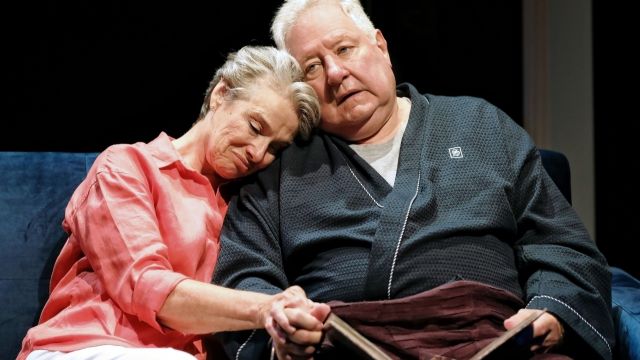 The Ensemble Theatre is packed to the gunnels. Its favourite son, the writer David Williamson, author of over 50 plays, 24 plays staged here, watches as the lights come up on the very last, Crunch Time. After 50 years of play writing, this is officially the end, finis, the final curtain. He put down his pen 11 months ago ‘and I haven’t missed it one little bit’.

Crunch Time is like most of his plays, a family saga with plenty of good jokes. But this one’s about assisted dying, with a father (played by John Wood) who, when assured that his time is up, demands the right to die with dignity. He has a pliant wife (Diane Craig) and two sons, the self-labelling Obsessive Compulsive Luke (Guy Edmonds), married to Lauren (Emma Palmer); and father’s favourite, the ‘golden boy’ Jimmy (Matt Minto), who is having a hard time with his demanding wife Susy (Megan Drury).

Dad, ‘never good at the huggy stuff’, has no idea how to connect with Luke, who wants nothing to do with his father. In fact it takes seven years for the elder son to even talk to him. Meanwhile Susy is searching for a more reliable provider. The action of the play is shared on the Ensemble stage. Assorted scenes zip along in front of a door, a splendid modern painting, a blue 2-seater sofa, an uncomfortable green seat, a wooden chair, a sideboard with drinks, and a cello that doesn’t get played until much, much later. Director Mark Kilmurry keeps the action flowing.

Meanwhile the father’s need for death-delivering Nembutal sends Jimmy to Peru. ‘I can’t let myself become a skeleton’, says Dad, and ‘before I waste away’, which is highly unlikely when you consider the girth of his stomach.

But John Wood’s warmth of character gets us over this. And the whole family of actors work hard to make this a successful production. Particularly good are Guy Edmonds as the troubled, scatty Luke, and Megan Drury as the stridently forceful Susy.

There is much sustained beating of the palms as the whole house rises to the tall, bashful Williamson. A short heartfelt speech from Kilmurry, and the great man is gone.