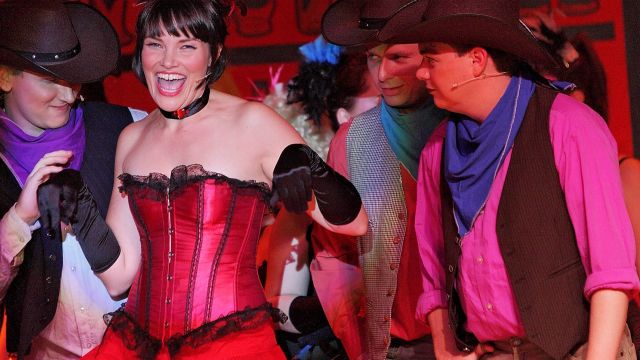 Curtains is an odd coda to the great Kander and Ebb partnership, usually far grittier in choice of themes (Cabaret and Chicago) than this musical comedy and Agatha Christie whodunit spoof. It’s a show that lost not one, but two original creatives, in lyricist Fred Ebb and librettist Peter Stone, over its 10 year development.
The musical, in which a theatre-obsessed detective investigates a series of murders during the Boston tryout of a Broadway-bound musical, feels like it owes far more to replacement librettist Rupert Holmes (The Mystery of Edwin Drood).
It’s a lightweight romp and homage that harkens back to and the Golden Age of Broadway musicals, with a dig at just about every showbiz cliché and stereotype imaginable.
Hornsby Musical Society has staged the NSW premiere.
Within the constraints of a venue that couldn’t always meet the technical demands of the script, they gave the show an enjoyable first Sydney showing. Solutions to issues like flying in key items, when the theatre has no tower, had to be found, and were met with varying degrees of success.
The author might do well to look at slight variations to the text, for simpler maximum impact at key moments when performed in more basic facilities
Mostly the score is musical pastiche, but amidst that there’s a genuine Broadway anthem. ‘Show People’ is up there with the genre’s best. There’s also a peppering of genuinely impressive ballads and duets.
‘Show People’ provided fertile material for a smartly choreographed whole company showstopper. It wasn’t on its own, with the Act 1 closer ‘Thataway!’ then later ‘In The Same Boat,’ with its clever use of cut out props, displaying Chris Bamford’s happy knack of tailoring choreography to the varied abilites of his company. This was generally the case, though some of the simpler groupings elsewhere in the show could be a bit clunky.
Curtains featured the customary broad blend of talent and enthusiasm you’d expect in a community theatre production. Stagecraft and delivery varied, largely depending on the experience of individual performers.
Standout performances included Sue Rowe’s vibrant and larger-than-life producer Carmen Bernstein, with her Merman-esque belt; James Ford’s engaging hybrid of stereotyped cop and starry-eyed fan as Lieutenant Frank Cioffi; Anne Wilson, as lyricist / replacement leading lady Georgia Hendricks, was vivacious in the big numbers, but had a broad dynamic range across the piece; Cara Dibdin captured the send-up style to a tee as the ingénue and romantic interest; Laura Sheldon was simply effervescent as Bambi, and Philip Youngman nailed the ascerbic comic timing of the flamboyant, bitchy director. Julianne Horne’s high theatrics absolutely stole the opening minutes as the bad-beyond-belief leading lady, then first corpse. Daniel Placido’s beautiful singing of ‘I Miss the Music’ was a ‘serious’ highlight.
Director Jane Mullen brought a clean overview and sense of genre to the production.
Some technical and continuity issues still needed to be sorted at the second performance. Two murders, I’m reluctant to give them away because they’ll be worked on, fell flat because of staging and technical issues.
There were also disconcerting sound moments; a voice booming through the main speakers, disembodied from the character emerging from a door in the side of the auditorium, and a couple of balance issues, particularly over-amplified voices at jarring moments in ensembles and scenes.
Curtains worked best when the stage was basically bare apart from an attractive false proscenium, rostra and cyclorama. Props and set pieces didn’t all reach the terrific standard of those used in ‘In The Same Boat.’
Curtains doesn’t rank for me with the great Kander and Ebb works, but it is a bright theatrical send-up, and it’s always fun to see a new offering in the community theatre repertoire.
Neil Litchfield