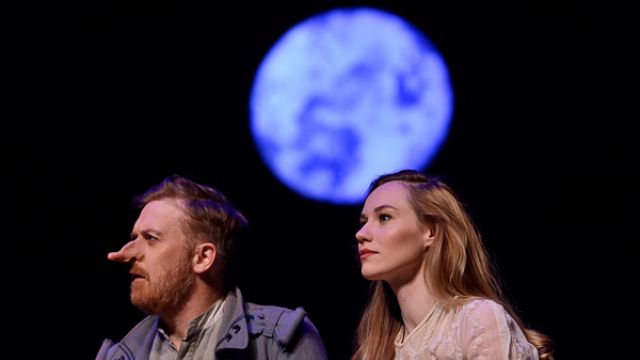 Two classic English translations of Rostand’s (1897) play in the original French (set in around 1640) are well-known to theatre buffs; Damien Ryan’s adaptation, presumably of one of them, sets the bulk of the play, in France, just before World War I.  Ryan’s adaptation maintains the incredibly clever word play that its hero’s nearly constant rhyming couplets do nothing to compromise, but introduces here and there a sly comic reference to historical events relevant to its more modern setting.

Ryan’s adaptation brings the play’s comedy and pathos to life exceedingly well, complete with working linguistic jests and full of the stuff of life — principles, pretences, invention, counterfeiting, loves, hurts, and all — and maintains its agelessness.  This story of the hopeless love of a great romantic soldier adventurer (compared in the play to Don Quixote) for a woman who he believes could not possibly see past his nose, and of the helpless devotion with which for her sake he helps even his rival for her love to win her heart, is as believable today as ever, if one can credit such rapid cleverness in a single individual.

The company’s use of the Playhouse architecture, bringing the engagement that Shakespeare’s audiences enjoyed, was inspired.  The production entailed often complex physical interplay between characters and props, and any of it could have fallen over at any time.  None of it did.  Supported with amusing lighting design, intriguing sets, brilliant use of the theatre space, and scrumptious costuming, the entire cast outdid itself.  Long (but never less than riveting) monologues were delivered with faultless dynamism and realism; verbal jests arrived so as to be heard above the laughter; and poetry, soothing or scathing, was perfectly at home.  Obviously well-practised complex set replacements, exits, and entrances were impressive for their apparent easiness.  And we felt ourselves the loves and hates between Cyrano and his compatriots.

Sport for Jove’s production of this tale of baffled love cannot fail to move anyone possessed of a soul.  If you’re one of those, be quick and see it.  It’s simply magnificent.