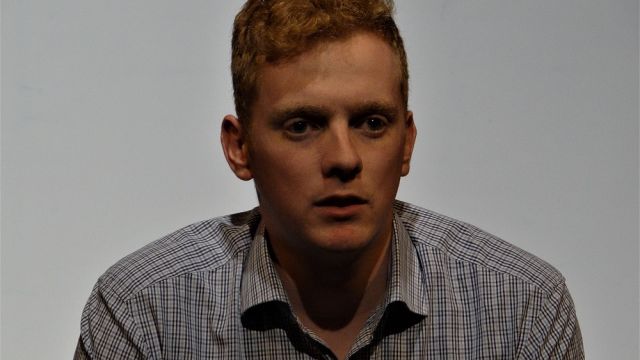 Directed by Elizabeth Walley with great precision and attention to detail, and as usual ending on a high, Daring Dog Monologues is comprised of six adeptly rendered monologues and is an excellent night of theatre of the intimate variety.

Performing monologues takes real skill as each actor is ‘out there’ with little else for support. They vary with regard to relationship to the audience. Some monologues present a character talking to another character/s and through them perhaps to the audience, some monologues are verbalizing self-talk, and, some are more clearly directed to the audience, breaking the fourth wall.  Director Walley has a real knack of relaxing her cast and getting the very best out of each and every one as they work singlehandedly. So as audience we can sit back and enjoy!

As I said, the night ends on a high and in the last monologue young actor Isabella Gilbert uses her marvelous physicality and dancing skills to convey for us the character of a megalomaniac Fashion Designer in Bruce Shearer’s I am ublet. This last work is a great energetic contrast to what has come before. The Gilbert sisters bookend the night with Cosmia Gilbert - talking to a companion as a USSR astronaut - of sorts, opens the evening. This work, Comet’s Tale by Michael Olsen, unfolds bit by bit. And Ms. Gilbert very skillfully and sensitively realizes all the pathos held therein.  Her embodiment of character and use of accent work a treat.

In It’s Not Funny by Maree Collie, Callum Straford disarms his audience with his fresh, sincere rendering of a young man with particular deep rooted issues about being able to be on time.   Perhaps a subject that many of us have issues with, I know I do.  It is a very relatable work both because of the writing and the elucidating performance.

Jitterbugby Brooke Fairley really won me with its subtle exposition.  I don’t know if it was there - but I could see the shadow of a ‘shiner’ (black eye) on actress Sarah Hamilton’s face.  Ms. Hamilton’s lovely vital dancing and stage presence is a treat to behold. Her shapely pear shaped body certainly lends itself to jitterbugging, which contrasts beautifully to the fairly dire and difficult circumstances in which her character finds herself. Elizabeth Dias’s writing Since allows Alec Gilbert the opportunity to express the dull totally disconcerting sadness of losing a loved one.   He probes deep and expresses much, as a man who is putting all his emotional energy into making cellos.  This is delicate and moving, and a considerably different type of persona from the usual for Mr. Gilbert to inhabit, thus giving him an opportunity to showcase his considerable talent.

And how hysterical for a monologue to commence with a letterbox and a nasty piece of dog poop as Heather Forbes-McKeon’s Desperate and Dirty at Twilight does.   This marvelous tale of lust, passion and bitter jealousy is expertly expressed by Clare Larman, whose character is fresh from playing bowls, perhaps. Written with a great sense of humour it is pretty much a riveting ‘who done it’.

On the night I attended, the audience was uncustomarily small for the Melbourne Writers’ Theatre.  (So many Fringe shows to catch.) However, after the ovation the people sitting around me just started to gush about what an unexpected and great show it had been.  They had taken a punt and were delighted that they had.

Another excellent show from MWT.