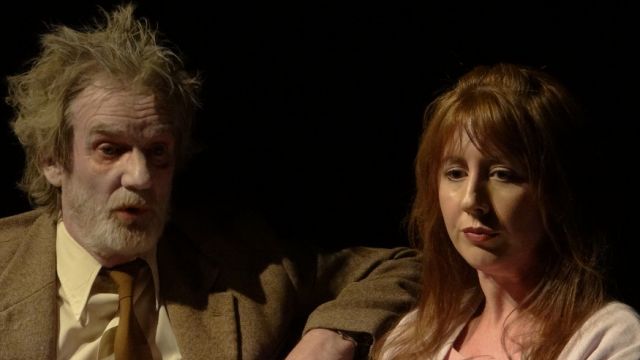 Dark Light is a group of five short plays the first two are very dark and focus seem to be exploring misogynistic brutality and after interval the evening lightens up.

The longest of the five works explores from a number or angles the type of misogyny that would lead to domestic violence at its extreme.  Silas James once warmed into the piece gives a compelling performance as a man trapped in his own angst as well the subsidiary characters of his own father and son.  The direction by Debra Low is effective - keeping the work fluid and well focused.  However I found this work to be long and believe with some clever editing the text could say the same thing in half the time.

As Lars, Justin Moore has made some strong and successful decisions to present a very unpleasant character.  Amy Bradney-George as the female characters makes a great foil.  Director David F Passmore chooses to have the audience repulsed by Lars through time dwelling on the ‘evil’ character as he slowly does up his tie initially, and at other times later in the staging.  However it all moves a bit too slowly for an emotional connection to be made and relief felt at the lucky outcome for the young woman.

Win Winis directed with aplomb and liveliness by Bridgette Burton the actors work beautifully together and there nothing is wasted or unnecessary in this brisk entertaining production.  It is witty and clever and owes much to the fabulous and convincing rendition of a Frog by Matthew Dorning.  The play makes sense, the writer’s point is made and the actors (Dan Walls and Marissa Bennett) as two Council workers perform very efficiently and effectively together.

By Amanda Miha and Jill Moylan

This is a sweet warm piece about a benevolent ghost it is sentimental and kind and full or cliché.  Chris Boek as Psychiatrist, Cathy Kohlen as bemused daughter and Keith Hutton as indulgent old Dad all do a great job. Direction by Justin Stephens is smooth.

And Cathy Kohlen has a voice that is very easy on the ear. However there is an urgency missing in the writing that the stakes could be lifted and the visitations of the Fathers Ghost could be more disturbing and really require alleviation. As it is - it plods a bit.

Is a funny, enjoyable situation comedy that requires tightening up in the Writing, Direction and Acting. The script contradicts itself a bit and the conceit of the Bridegroom and his Best Man and other mate standing up the front of a Catholic Church under the scrutiny of the wedding attendees is not convincingly maintained through the Directing or the Acting.  Although the audience enjoys it and the three main characters worked well as a team - over all this play seems to be lacking in adequate rehearsal time.  Cameos by Chris Boek and Keith Hutton are amusing.

All and any of these works would be great on the One Act Play circuit across Victoria.