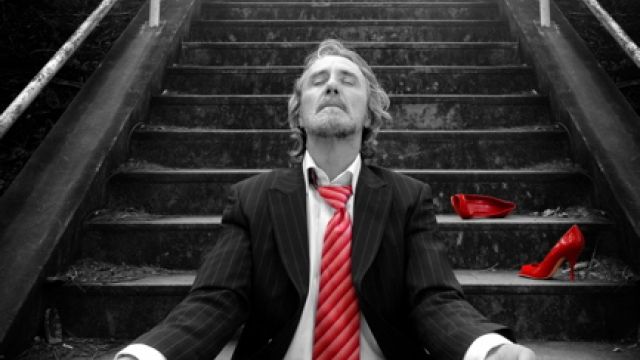 What a joy to watch a play where you peep through a window of today’s world and recognise the people there.
What made it work?
First came the words: Simon Alroe (watch this writer – he is following in Williamson’s, Simon’s, Bennett’s and Ayckborn’s footsteps) focused on the economic collapse and corporate people caught up by it.
The playwright examined what in their past might have accounted for the characters’ reactions to what happened. That engaged us.
With its strong Brisbane-centric strands we empathised with these people. Equally, minimal locale script adjustments would allow audiences in UK, Europe, USA to do the same.
Then came the production. Multi-awarded director Lewis Jones and four sterling actors in a similar league (Robert Coleby, Steven Grives, Chris Betts and Helen Howard) took this production to the next level – a play that would engage audiences anywhere in Australia and adapt for other countries / cultures.
With minimal set, inventive lighting (Jason Glenwright) and sound (Chris Perren) designs, the action moved smoothly (almost overlapped) between scenes without trying to create multiple realities. Script, direction and actors established the locales instantly - as we do in dreams, slipping between past and present, reality and memory, morality and sexual fantasies.
This is the stuff of real theatre. It worked!
Congratulations to the playwright and the team who created its premiere.
Jay McKee