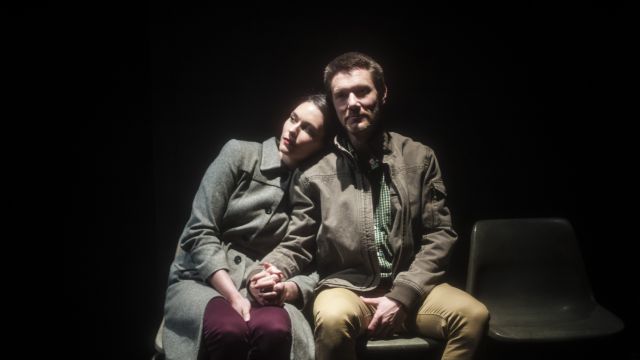 Red Stitch gives us its most exquisite offering of the year with this new production.

Always ready to look for new ways to tell stories, the actors ensemble has taken Simon Stephens agonisingly beautiful one act monologue, and commissioned a second one act piece by Tom Holloway that runs parallel to it. For maximum enjoyment, do NOT read the director’s notes beforehand, discover the link for yourselves and it will take your breath away.

Played back to back with only a few seconds between, we slowly realise that this is ONE play, not two, displaying both sides of the same coin.

In Dead Centre  a woman fleeing from a life that is unbearable, to Australia to find herself and start living again, muses on life, Uluru, and racism, all the while fearing she is going mad. The monologue takes place in front of a black scrim which is used for projection of black and white images of the outback and the moon. Yet several times the upstage area behind the scrim is lit, and we see the shadow of a man…who is he? What part does he play in her story? Is he a shadowy memory, or a fantasy? How does his presence inform the NOW? 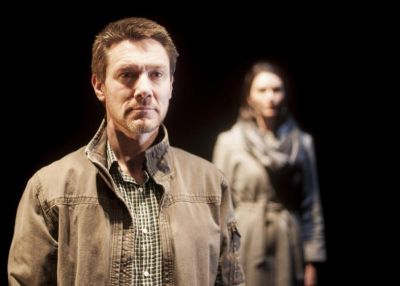 Tom Holloway’s writing is clean and entertaining, but it’s not visceral, possibly because he has chosen to take a POV look at Australian society rather than delve into her pain. In fact, for the most part he ignores it, and that too is part of the Aussie psyche; the things we don’t talk about even though we need to. We know she is divorced, is looking for a new life, and is somehow estranged from her father, other than that we learn that we are racist – and so, to her surprise, is she when she finds herself on a tour where the other women are all Chinese who speak only Mandarin. But we don’t understand why she fears madness…not yet. Instead, we are made to look at ourselves, and the piece is more political than personal, and that’s to the detriment of the play as a whole.

Rosie Lockhart is wonderful as the woman who is both broken and breaking down and it’s been a treat for me to watch her growing as an actress in the mere three years since graduating from VCA. There is no credit for dialogue coach, but her accent, as one of the upper middle-class well educated elite, is impeccable.

Sea Wall introduces us to Alex, an Irishman in so much pain that he can only talk to strangers about it. He’s suffered profound tragedy, lost his life, lost his reason for existence and is left with only a huge gaping hole through the centre of him which is so real that it can surely be seen by everyone he encounters. Stephens is one of Britain’s finest contemporary writers (Birdland, The Curious Incident of The Dog in the Night) and for this play he has opened up a vein and written in his life-blood. Rarely are we privy to such truth and intimacy, without trickery or false drama, in the theatre. It is moving beyond belief, and surely part of our humanity is being able to witness with empathy the pain of others, for we can never truly “know how you feel.” 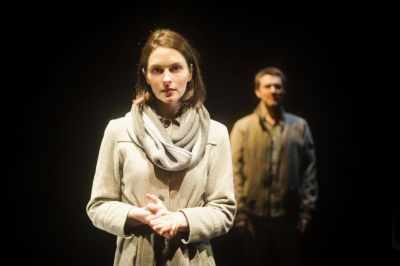 But the wonder of this piece goes far beyond the writing…it lies in the truth and emotional honesty of Ben Prendergast. This actor, a latecomer without formal training, becomes Alex in an astonishing performance to rival (dare I say, surpass?) Kate Cole’s exquisite performance in Grounded for Red Stitch in 2013. The pain in his storytelling is palpable, the sense of desolation overwhelming, and there is that woman behind the scrim, taunting us. We can do nothing to change anything, to ease the agony that goes far beyond grief. Alex tells us, speaking about God, that we don’t understand…not yet; but we will. And of course that too resonates on the play. I have rarely seen an audience so still, so moved by a performance which is essentially low key and without Mr Prendergast’s usual charisma. I myself couldn’t stop the mascara from running….fortunately the male audience members with tears in their eyes were not wearing mascara. No amount of acting can make an audience believe if the actor doesn’t come from a place of emotional reality. Truth is everything, and that’s all this actor needs. Fortunately he hasn’t learned any drama school techniques to fall back on, and we are all the better for it. The final scene, where the two stories come together in a heart-breaking memory, is beautifully realised.

This is very special theatre and Julian Meyrick, a truly fine director, shows complete empathy with his characters (and actors) and resists any idea of showy emotion or un-natural staging, everything is subtle and restrained and that doubles the impact. I could have wished for perhaps a little less political argument, but it doesn’t swamp the emotional core. Mathew Adey’s simple set is perfection; Ian Moorhead’s sound and lighting composition, including the sounds of the sea and the outback, is quite wonderful; and the digital design of Katie Cavanagh is so marvellously integral that it’s hard to imagine the play without it.

This is one of those occasions where all elements merge as one in the quest for excellence. Red Stitch has raised the bar yet again. A production of sheer perfection.