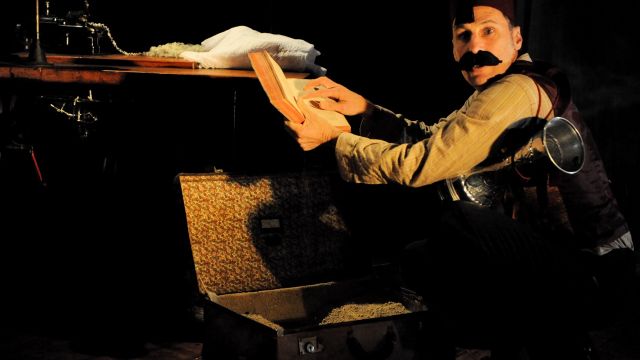 Deceptive Threads depicts aspects of the comprehensively researched family, and lived personal, history of David Joseph.  It is an exquisitely crafted piece of theatre made by a number of exceptionally skilled practitioners and seamlessly linked with insightful direction by Karen Berger.

As a sincere, genuine, moving work, full of heart and integrity, it brings with it strong and timely messages about attitudes to migrants and refugees.

David Joseph, a delightfully personable performer, executes short vignettes of several characters from his heritage, most particularly his paternal and maternal grandfathers.  The first of whom was a Lebanese refugee and the second a Tivoli artiste and ASIO spy. 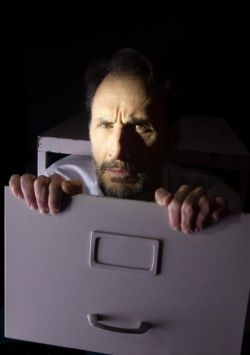 It is not so much a narrative as a collaged collection of memories, facts and emotional responses.  As Joseph slips from one character or scenario to another, the telling is continued with beautifully orchestrated multi-media.  This is masterfully realized through the projecting of historical ephemera, by Zoe Scoglio and Hisham Tawfiqi, onto a wonderful variety of objects on the set.  Sound design by Joseph and Berger fits ‘hand in glove’ with visuals.

The whole culminates in some masterful drumming by David Joseph.

As a self devised work is engaging and satisfying and would be particularly useful and interesting for VCE Drama Students and as inspiration for those who create their own work.

As this production settles in and timing becomes more relaxed it will doubtless gain in nuance.