Dickens Down Under by Mel Morrow 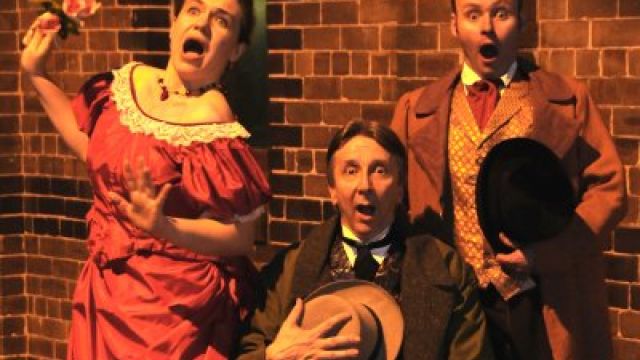 For their final production for the year, or as they have called it ‘their pre-Christmas treat’, the Genesian Theatre Company are presenting the world premiere of Dickens Down Under, a Victoriana Vaudeville by prolific Australian playwright, Mel Morrow.

With Dickens Down Under Morrow looks at nineteenth century Australia through the eyes of two of Charles Dickens’ sons, Alfred D’Orsay Tennyson Dickens and Edward Bulwer Lytton Dickens, who came to live in the land that their novelist father relegated a number of his colourful characters to!

In real life, Alfred and Edward Dickens did immigrate to Australia, and lived out relatively ordinary lives. With Dickens Down Under Morrow has fashioned a fictional scenario where Alfred and Edward come to Australia and fall upon lean times. In order to get themselves out of trouble they start doing readings and enacting scenes from their father’s work at the local Dubbo School Of Arts to resounding success.

This is a show with a winning recipe, ‘a little historical bush tucker, a generous serving of literary plum pudding and many large slices of musical pavlova’. We get to meet many of our favourite Dickens characters, including literary emigrants Magwitch, Mr Micawber, Mr Jingle, the Artful Dodger, Daniel and Emily Peggotty, and Wackford Squeers, and the writer also throws in the perennial Scrooge.

Director Roger Gimblett and his cast bring Morrow’s musical richly to life. Baritone Christopher Hamilton plays Alfred, tenor Peter Layton plays his brother, Edward, and soprano/pianist Maria Okunev plays Edward’s wife, Constance. Highlights were a catchy number that the cast had the audience singing along to, and the shows’ foot tapping finale, ‘We’ve had a Dickens of a time’.