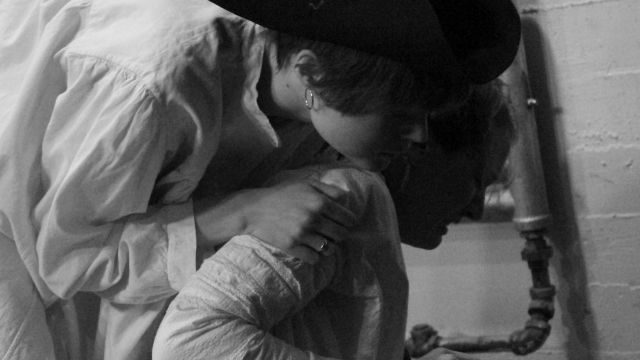 Upstairs in the Balcony Rooms in the Buckingham Arms Hotel there is a little theatrical gem – Dickinson’s Room.

In three small rooms, which have an untold history in themselves, one enters the life, mind and imagination of Emily Dickinson, one of America’s greatest poets.

This unique and engaging piece of theatre is unconventional; as critiqued in Broadway Baby, ‘there is a wonderful sense of freedom to the work. It doesn’t feel pinned to a stage.’

The brochure states that this work was ‘born under the tracks in New York City’, and that ‘performed by one actress, using only Dickinson’s poetry and letters, the piece borders on physical theatre and dance, suspended between the realities of the poet’s imaginary life and boundless universe of her imagination. It seeks to give dramatic form to the intrinsically un-dramatic: the space and silences from which great thought, and with them great words, proceed.’ In all this, Dickinson’s Room is highly successful. For roughly 60 minutes, with Miranda McCauley as a radiant and dazzling Emily Dickinson, a small privileged audience is led from room to room to room and back again. I use the word ‘privileged’ as that is what it felt like. There were only twelve of us, and the physical intimacy led to a wonderful camaraderie.  None of us really knew what was actually happening as Miranda McCauley’s Emily Dickinson leapt and jumped mentally and physically from point to point, from room to room, but always being kind and courteous to us, her visitors and letting us into the mind of this extraordinary poet. She engages directly with you, and it is truly excellent. You are completely engaged and touched by the vulnerability and extraordinary sensibilities of this great poet, and subsequently come away enlightened and uplifted.

For those who may not know, Emily Dickinson (1830-1886) was an eccentric. Only about twelve of her poems were published in her lifetime; most of her over 1,000 poems were published after her death. During her lifetime no one really had any idea of the range and brilliance of her writing. She dressed only in white and was a recluse who virtually never left her house in Amherst, Massachusetts. In her later life she never left her room.

Hence, this production honours a certain aspect of Dickinson’s real life; that it was a privilege to actually be in her presence. Was she mad? From a modern perspective, and from this production, she was mentally unstable, possibly bi-polar. Nonetheless, out of this instability and fragility came work that touches the sublime.

I loved this show; mind you, I love Emily Dickinson so it was a bit of a no-brainer re me attending. What I didn’t expect was how innovative and exciting was this production by Bad Neighbourhood Theatre, directed by Charlotte Day, and the charming and disarming performance of Miranda McCauley.

One is not only in Emily Dickinson’s rooms but also inside her head – and it is wonderful.