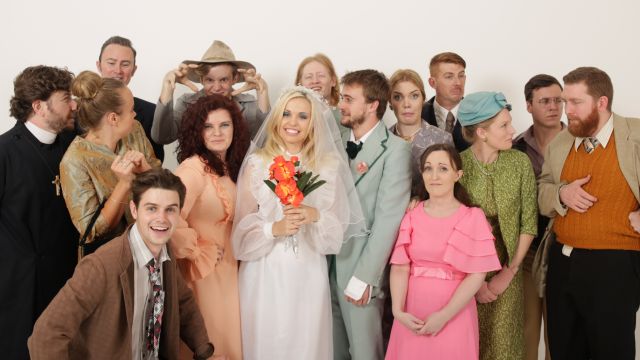 Vivid and rude, this production of the classic comedy was grabbed by the scruff of the neck by a 20 something student director who was born twenty years after it was written.

Darcy Green set up an authentic looking  wedding booze up for the late 1960’s union of Protestant Morrie McAdam and Catholic Reen Delaney in the Mechanics Institute Hall, Dimboola, Victoria.

When one of his stars got laryngitis the student director learnt the role of Horrie in a few days.

Dimboolais still one of the most widely performed Australian plays because of the clever writing and how familiar members of the audience find the embarrassing characters.

In the foyer after the performance people were still saying things like  he is my brother, she is my cousin.

It was also uncanny how Jack Hibberd had his finger on the pulse about inappropriate behaviour in the clergy. Although these days we don’t laugh at it as you might have in the 1960’s and 70’s.

Aiding this production was a lively four-piece band and an experienced acting ensemble.

With 15 in the cast it is not possible to mention all of them, but standouts included Adam Delaunay as Knocka, who looked like he jumped straight out of a vintage Australian cartoon, and Kimberley Kelly as the young brat Astrid was a scream.

They are almost minor principals in the play which is a platform for the rival tribes to mark their turf and sort out their differences with some fisticuffs.

Members of the audience also got into the spirit as wedding guests, including an excellent ad lib by a man called to the floor during the bridal waltz.

This production is worth a look for a good night out.