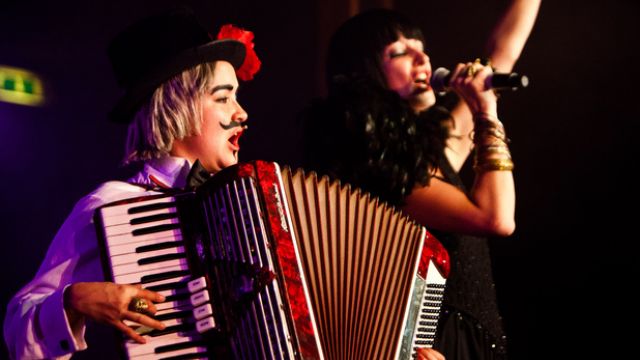 The Famous Spiegeltent is the perfect venue for EastEnd Cabaret, with its “deviant diva” Bernadette Byrne in all her 1920s Berlin excess and exaggerated Germanic accent. Introduced by her comedy partner and musician Victor Victoria (made up in the tradition of a classic half man/half woman), she started proceedings by picking two men from the audience to form a “man beast”, hitching a ride to the stage on their backs as they crawled down the aisle on hands and knees. This set the tone for the show, which was a tamer version of late-night, hole in the wall cabaret of old, tailored for a mainstream audience. But it still had its moments, including plenty of laughs.

Ms Byrne is a captivating performer, ably supported by Mr/Ms Victoria, and was able to effortlessly hold the audience’s attention throughout. Both members of the duo are also accomplished singers and entertained with songs in keeping with the show’s ‘Dirty Talk’ theme such as ‘Accidental Anal’ and ‘Danger Wank’. Most of the laughs came not from wit but from the sheer outrageousness of Ms Byrne’s antics, accompanied by waspish interjections from Mr/Ms Victoria. The highlight of these was the ‘audience participation’ segment, where Ms Byrne coerced an audience member onto the stage and mock-seduced him, raising the ire of Victor Victoria who chased him out of the venue, concluding with the sound effect of his ejection. It was this level of unpredictability that kept the show moving and the audience enthralled. Dirty Talk is a fun, risque show from two strong entertainers.