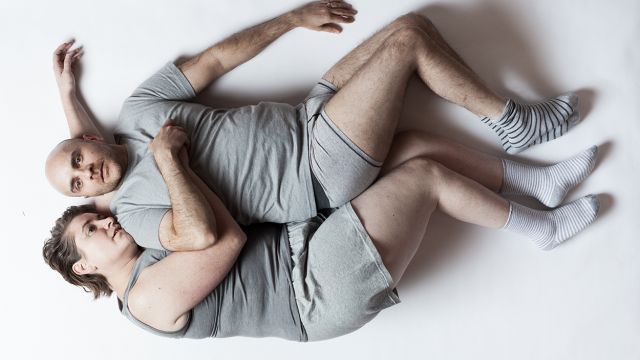 A couple (Michelle Robertson and Monty Burgess) lounge on a bare platform.  It is up to our imaginations to create the physical world of these people.  They may be married, they may not, but it seems – maybe – that they may have been together too long.  They’re recognisable people – people you might know – people who might be you.  They’re entering middle age, they’ve ‘let themselves go’ a little, and their lives have settled into a familiar if empty routine.  There’s a superficially relaxed, unhurried but vaguely hostile undertone to their sporadic conversation.  She is the more responsive: she smiles, she asks questions and is interested in the answers, although often she gets none.  He is more self-absorbed, withheld, guarded.

They’ve been, it seems, to a dinner party – maybe they’re just home from it.  They compare notes and impressions – as you do.  They didn’t know any of the other guests…  only it turns out they did…  Two in particular.  The guests at the dinner party form the basis for their continuing exchanges, which – as the play proceeds – become increasingly fantastic and dreamlike, interweaving the banal, the challenging, the confessional and taking flight into what may or may not but probably are sexual fantasies of a not particularly exciting kind and which sadly appear to excite neither one of them.

Ms Robertson and Mr Burgess really do wonders with this challenging text.  Challenging for them.  One of playwright Kat Moritz’s notes on the text is that ‘Lines should only be spoken when the actors feel compelled to speak them…’  This must have been another challenge, in this case, for director Eryn Kimberly.  It involves, in practice, dangerously long silences (much longer than a Pinter pause), which might indicate each character’s inner state, but result in frustration for the audience – especially when, to continue Ms Moritz’s note, that the lines should be ‘spoken from a place of genuine curiosity’.

Ms Moritz also writes in her program note that her play ‘may bore you.  It may offend you.  It may move you.  Or it may just wash over you.’  In my case, I confess, the first and the last.  It is, for all its risky originality, devoid of humour – apart from a ‘television cooking show’ demonstration by Ms Robertson early in the show that feels arbitrary and irrelevant but that endears us to Ms Robertson.  We see how lovely she is and maybe that’s the point: her partner doesn’t appreciate that anymore

The writing and the performances do create a certain initial tension, but as we realise that there will be no decisive reactions and no explosions, no matter how (self-consciously) bizarre the provocations or, indeed, how indifferent the responses, we find we are merely observing the unbridgeable gulf between these people.  Ms Moritz’s intention would seem to be resolutely bleak – if not just a touch condescending to her characters.  The final image of the couple, held during a very long, slow fade-out, is certainly as bleak as can be.