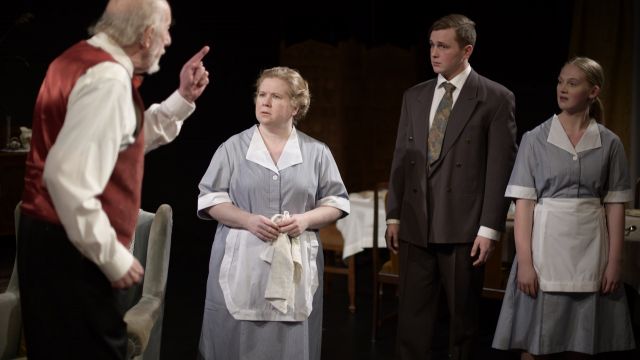 Award-winning playwright the late Horton Foote is most notably remembered for his screenplay for To Kill a Mockingbird, however he is also responsible for many fine plays that explore the human condition. Writing from experience and taking inspiration from people he met through his youth, he has often been compared to Chekhov for his ability to capture the spirit of what it means to be human.

Co-founder of Red Phoenix Theatre and Director of this black comedy, Libby Drake has assembled a cast of 13 to bring it to life…or death, however you wish to look at it.

Despite challenging economic climates, the Gordon Family have managed to keep their home, which sits on many acres in their hometown of Harrison, Texas. The once successful farming estate has suffered during the economic slump of the 80s. On the verge of bankruptcy, the family gather for a dinner where the only thing on the menu is greed.

It does not take long to figure out the motivation of this complex family. Milking the estate’s funds to feed gambling addictions or simply to avoid having to get a real job, each member of the family reveals their selfish motives early in act one. Although the play is set in America, Drake has decided to eliminate accents, thereby making the story more universal.

Accomplished actor Jean Walker breathes life into family matriarch Stella Gordon. Although hounded by her children to divide the estate, she keeps them guessing with her intentions. Playing the role with aplomb, Walker sets the tone for some wicked spats.

Lucille’s son (Mark Mulders) has the thankless job of trying to manage the estate and the frequent requests for loans. Unfortunately, Son has picked this dinner to introduce his fiancée Pauline (Laura Antoniazzi). Her rosy outlook seems out of place in a story filled with vitriol.

Household staff consist of two maids (Kate Anolak and Gabi Douglas) and a 92-year-old butler named Doug (Wayne Anthoney). Although only support roles, they each make their presence felt. The relationship between Stella and Doug is touching and adds a human quality amongst the bitterness. Rounding out the characters are Mary Jo’s husband Bob (Lindsay Dunn) and their ditzy daughters Emily (Jasmine Leech) and Sissie (Nicole Walker). Each actor manages to evoke disbelief as you witness their character’s abhorrent behaviour.

The barbed dialogue draws the audience in as we witness the destruction of a family driven by wealth and desperation. The cast do well to maintain pace in this wordy tale.

Although the story holds audience attention, the last 10 minutes of dialogue felt strained and repetitive. Disappointing, given the high quality of the writing previously.

Dividing the Estateis a well-rounded production that finishes with a whimper rather than a bang. It is, however, a satisfying night at the theatre all the same.