The Dollhouse (adapted from the play by Henrick Ibsen) 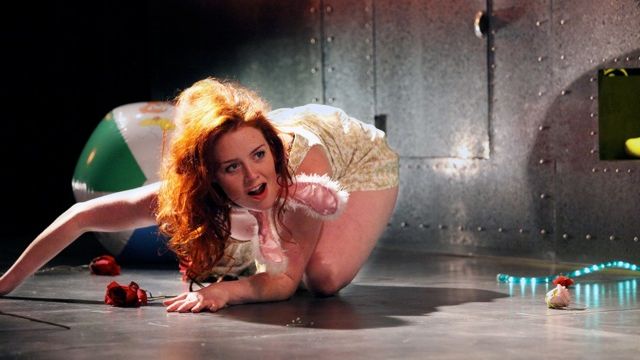 Despite post-feminism, society’s patriarchal structure, as illustrated in The Dollhouse, continues to manipulate and control the lives of women, and particularly mothers. Reset in contemporary culture, this is a ‘hyper-realist’ rethink of Henrick Ibsen’s 19th century play, with shades of reality-tv influenced voyeurism.

When The Dollshouse actually begins is anyone’s guess. As the audience enters the performance space, the cast are already interacting on stage. This highly unstructured state of affairs is sustained, until it gradually seeps into a more recognisable dramatic form.

Nikki Shiels (Nora), Kade Greenland (Torvald), Edwina Wren (Kristine), Josh Price (Dr Rank) and Daniel Schlusser (Nils) interact so physically and familiarly that the audience are positioned as intruders. And rightly so - we are dealing with the deeply personal realm of gender politics after all.

The Dollshouse is somewhat improvised and organic, adding to its hyper-realist design, and implying no two performance can be the same. The set design, an impersonal and cold steel wall with various trap doors, is quite inspired.

Effective utilisation of technology and soundscapes, and some quirky costume features not only broaden the intertexual context, but heighten the psychological tension. The ‘horror’ sequence involving children’s toys further pinpoints the imprisonment of motherhood.

The ending, somewhat disappointingly adheres to the alternative ending Ibsen reluctantly scripted for German audiences, but with the suggestion all is not resolved.

The Dollhouse is 75 minutes of thought provoking material, without interval, for those who crave innovative theatre.