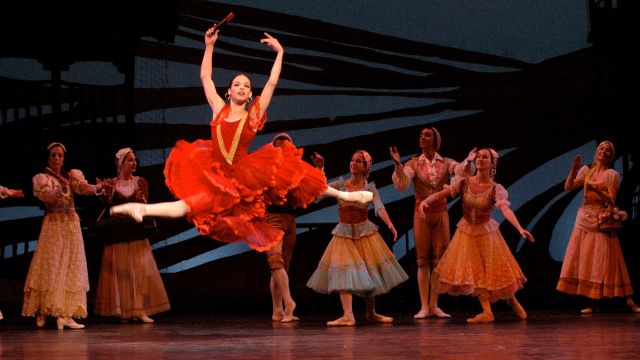 Don Quixote could not have been a more appropriate choice for the Ballet Nacional de Cuba on their latest visit to Australia. The critically-acclaimed production, deeply-rooted in the Hispanic culture, was the ideal work to show off the young company’s prodigious talent. The unmistakable passion and soul on display was spectacular. Particularly outstanding was Premier Dancer Sadaise Arencibia as Kitri. With breathtaking technique, time after time she wowed the audience who responded with thunderous applause. Her partner, Alejandro Virelles, as Basilio, was equally as strong, and together their Act Three grand pas de deux was sensational. Yadil Suarez was a handsome and cocky bullfighter, Espada, with Veronica Corveas perfect as the fiery Mercedes. Others to be noticed in this excellent company were Ernesto Diaz (Camacho), Felix Rodrigues (Lorenzo), Gretel Morejon (Juanita) and Elizabeth Sose (Piquilla). The Queensland Symphony Orchestra, in top form under the masterly baton of Giovanni Duarte, gave powerful life to Minkus’ beloved score. The production, a Queensland exclusive, played as part of the 2010 Brisbane Festival.
Peter Pinne