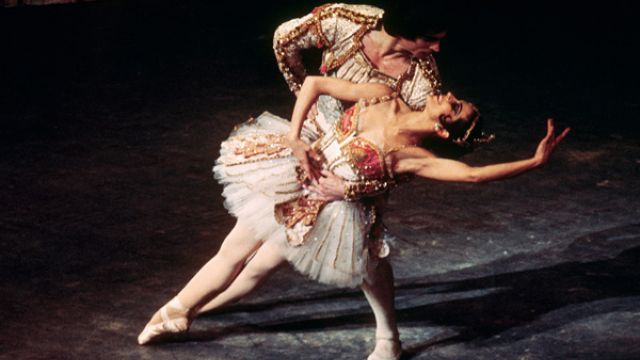 If you want to know why Rudolf Nureyev became the rock-star of ballet following his defection from the Soviet Union in 1961, then you only need view this movie – a superb showcase of his amazing classical ballet talent.

Nureyev first choreographed Don Quixote for the Vienna State Opera Ballet in 1966, with the Ludwig Minkus score adapted by John Lanchbery. He made some changes to the work and then re-launched it with the Australian Ballet in 1970, where it became one of their most admired productions and traveled the world, putting the company on the global map. This 1970 production forms the basis of the film which was shot in the disused Essendon airport hangar 12, in Melbourne in 1972.

Apart from Nureyev playing the barber, Basilio, the entire cast were from the Australian Ballet, and what a cast they were with Robert Helpmann as the title character Don Quixote, Ray Powell as Sancho Panza, Lucette Aldous as Kitri/Dulcinea, Colin Peasley as Gamache, and the corps filled with future stars: Gailene Stock who went on the become director of the Royal Ballet, London, Gary Norman, who danced for the National Ballet of Canada and the Hong Kong Ballet, and John Meehan, who did likewise with the American Ballet Theatre, and the New York City Ballet.

UK Director of Photography Geoffrey Unsworth (who had credits for 2001: A Space Odyssey, and later Cabaret), was imported, along with the production designer Barry Kay and their work is outstanding.

It has a ‘live’ feel but it’s not and hovers somewhere between a film and live performance. The use of live animals (horse, donkey, chickens) and real fruit and more candlelight than a summer sky, added to the reality, with the market-place scenes intoxicating.

Nureyev was all over the piece, and whenever he was onstage you eyes automatically focused on him, his performance was so charismatic. Executing brilliant pirouettes, grand jetes, and amazing single-hand balances where he threw his partner Lucette Aldous into the air, not once but three times, it was technical mastery and classical ballet technique of the highest order. And the role allowed him to indulge in some impish humour, when he is stabbed in the third-act and miraculously comes to life. Aldous’ Kitri was also a tour-de-force with a sultry and sexy allure and a spitfire delivery. Their pas-de-deux in the Gypsy Camp was especially erotic.

Helpmann was an imperious and riveting, delusional Don Quioxte, with Ray Powell’s Sancho, despite an obvious fat-suit, doing sterling back-up as the ‘aide-de-camp’. Colin Peasley was an outrageous fop, Gamache, whilst Gailene Stock and Carolyn Rappel were terrific as the girl-friends.

Whether as gypsies, toreadors, or street dancers, the corps brought flamboyant style to everything they did.

The film was ‘lost’ for 25 years and this version springs from the 1999 Blue-Ray release. The colour was a bit faded at times, but the music sounded wonderful and razor-sharp. At the time of it’s 1972 release, the New York Times called it ‘a dance film for all audiences’ and 48 years later it’s an accolade that still applies.