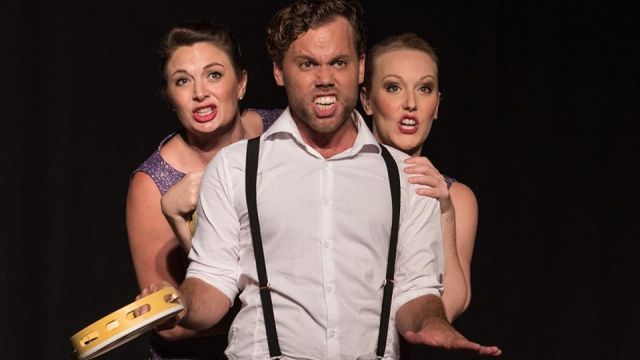 Dr Felicity Rickshaw's Celebrity Sex Party is the latest musical by Tyler Jacob Jones and Robert Woods, whose previous musicals, Falling to the Top - A Musical Trashtacular and Point and Shoot - A New Musical, have won multiple awards at Fringe World. I expect, given the cleverness, freshness and polish of Dr Felicity, that this production will receive similar accolades. It certainly deserved its sell-out crowds. If the title didn't tip you off, the show is a little bit 'naughty' and you would not be wanting to be playing a drinking game with the 'f word' — (you wouldn't survive), but despite the fact that it is rather crass, this show is also incredibly endearing. Amy is a loveable dag of a heroine and her love interest, played by Tyler Jacob Jones, is gorgeously awkward. Amy's story, much of which occurs inside her head, is helped along by a Greek Chorus of sorts (Tyler Jacob Jones again, Erin Hutchinson and Claire Taylor) who cleverly play a plethora of family members, and mega-famous stars.

The music, played live by musical director and composer Robert Woods is catchy and clever, and the comedic skills of Robert are well used in his brief cameo.

This show will travel to the Busselton Fringe and no doubt will have a life beyond that, so I am loathe to spoil the plot, but I will say that this production contains perhaps the cleverest and nicely staged sex scene I have ever seen portrayed.

Dr Felicity Rickshaw's Celebrity Sex Party is another treasure of a show from Holland Street Productions and was a joy to watch.