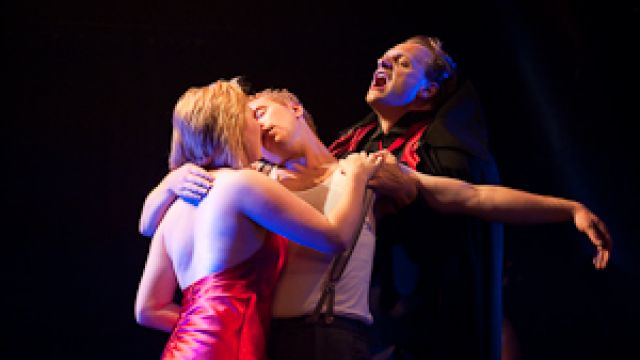 Dracula: the name conjures images of sinister, blood-sucking vampires, the un-dead and terror. The novel written by Bram Stoker in 1897, on which so many plays and films have been based, has been extremely successful. Stoker worked at the Lyceum Theatre for 27 years for the famous actor-producer Sir Henry Irving as a box-office attendant, but turned his hand to stage managing and acting when needed. His stage play adaptation, Dracula or the Un-dead, was not initially successful. A much later adaptation by Hamilton Deane in early 1927, although varying from the original plot of the novel, became very popular, running for almost four hundred performances in London, followed by three years on tour. By the end of 1927, collaborator John L. Balderston opened the production on Broadway (with slight changes to suit American audience taste). It was here that Bella Lugosi (since famous for the part) and the black cape lined with red satin became identified with the role. The Horror genre certainly owes a lot to the clichés and stereotypes we have come to expect of a Dracula production.

With this expectation fixed in the back of my brain, I set off to The Playhouse Theatre in Hobart. The Hobart Repertory Theatre offering, directed by veteran actor/director/writer/producer Robert Jarman was a clever piece, taking the audience on an interesting journey back into the essence of Dracula. The struggle of good against evil/ dark against light underpinned this production, without the stereotypes we have come to see in the vampire genre. Rather than stereotypes, Jarman gave us a stylized production, using his extensive skills as a director to tease the audience into thinking it was afraid, even though we all know what to expect from a vampire play. I know I’m not supposed to, but I laughed!

Jarman maintained the heightened tension which is expected in horror, with all actors bringing in good performances. Nick Falk (Dracula) did a terrific job, maintaining the Transylvanian accent and sinister sounding voice throughout. I was worried for his health, though - he must have had either a very sore throat by the end of the run, or undertaken a lot of voice training during the production. Matt Wilson (as RM Renfield, the madman) convinced us all, gradually becoming increasingly loony, and, surprisingly, garnering sympathy in the role. Ivano Del Pio (Dr Seward) and Mike Edwards (Professor Abrahan Van Helsing) both performed well, as did Steven Jones (Butterworth). Relative newcomers Eli Halliwell (Jonathon Harker) and Jessica Davies (Miss Wells) provided good, strong support roles. They will be ones to watch in the future. Jess Lewis-Shaw (Lucy Seward) was the suitably pale, vapid, blonde victim, the innocent virginal-type, and looked the part. I have one complaint: her voice projection, while necessarily soft, sweet and lilting, was not very audible, even in the middle of the theatre. Perhaps it was planned, to highlight the change to her sinister Dracula’s-bride status at the end.

The final crucial element of the play, sound, came from musician/actor, Anica Boulanger-Mashberg (Annie, a madwoman and the musician), providing the chillingly apt theme music, with her moody cello. A cleverly minimalist set, mood lighting and special effects, added to the horror tone. An excellent production: one to hold up against the over-the-top vampire and werewolf screen offerings which currently abound.