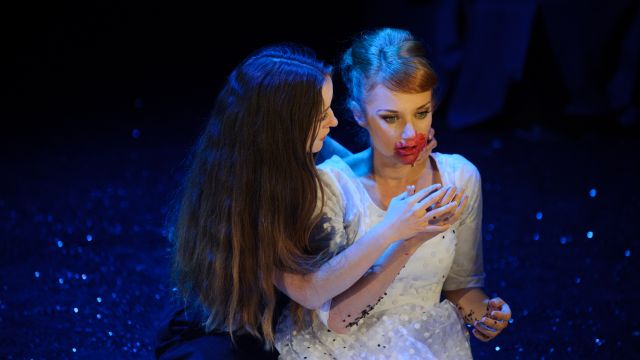 Dracula by Little Ones Theatre Company at Theatreworks in St. Kilda is a visually stunning and physically enchanting piece of theatre.  It’s a romp devoid of text, but relies on the physicality of the actors, a beautiful design, a mesmerising soundscape and the collaboration of some of Melbourne’s best talent.

In this engrossing and sensual homage to Bram Stoker, silent cinema and German Expressionism, this Dracula’s emphasis is on power, movement and the construction of visual aesthetic over narrative. The vampire metaphor is reflective of our own endless desires, sins and immortality.  Dracula, much like his counter-part Dr. Caligari, is pulling the strings of power-representative of the unseen powers who rule our fears, desires and fantasies. Director Stephen Nicolazzo and his team have created a beautiful piece of theatre where ideas are expressed through chiaroscuro lighting, which creates dramatic shadows and contrasts reflecting the inner and outer worlds of the characters, and the physicality of the talented actors.

Little Ones Theatre has been accused of style over substance, but not in this show inspired by ‘one of literature’s most intriguing queer figureheads.’ On one hand, subversion is irrelevant, on the other, perspectives on the politics of gender, nod rather than push, ask rather than tell, and establish a place and space from which to question norms of mainstream hegemony.

Dracula, in different incarnations, is played by both Catherine Davies and Alexandra Aldrich. These two actresses, with their night and day physical embodiments, are the highlight of the show. The contrast in the juxtaposing physicalities of these actresses is stunning.  Aldrich’s expressive face and tree-like physicality is hard to take your eyes off of whilst Davies’ overt sexuality oozes from every pore.  The scene where she slides out from under the curtain amidst mist and smoke, moving evocatively without showing her face is amazing.

Admittedly, after one hour the narrative becomes sticky, but a quick dramaturgical sweep and 15 minute cut could remedy that. One need not know Stoker’s Dracula story beforehand to understand the narrative.  Simply take in the rich, theatrical feast and enjoy it.