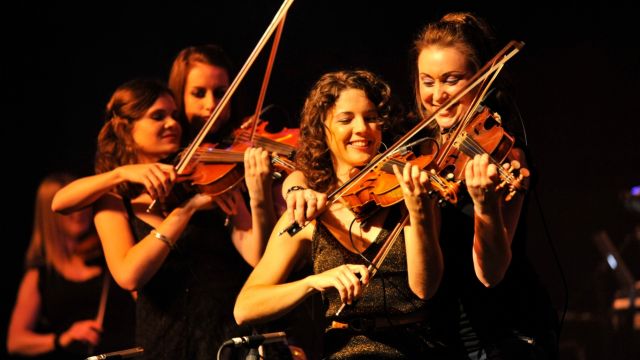 Enriching every piece were surprisingly well-synchronised visuals. And throughout moved the musicians: rarely in traditional poses, usually afoot, often dancing steps difficult even without an instrument occupying both hands. Deepblue capably sustained Barber's Adagio at a pace that treated the audience's sonic palate to the aural equivalent of golden syrup, butter, and wild blackberry.

Transformation underlay much of the performance, and made "Friday on My Mind" a song of humorous, authentic joy. Genre transformation wasn't the only kind of surprise, though; seguing from Ravel into the ’70s instrumental "Popcorn" was both funny and natural.

Creative juxtaposition indeed ran through the entire performance: classical and popcorn music; visual rhythm and physical comedy; playing and dancing. Deepblue's great musical range, from Celtic acoustic to electro-orchestral soft rock, would hold any audience. But its creativity at all stages, from composition and arrangement to taking live feedback through the performance, promises that its rapid rise since 2006 from experimental research project to near professionality will continue.

Deepblue's next innovation is anyone's guess, but it has already re-engaged the young in classical music. Deepblue looks like an orchestra, but it plays with fire, shares with joy, and dances with electricity. When it comes your way, pay attention.