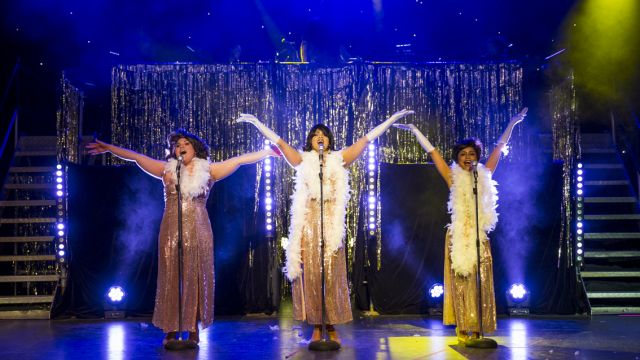 Rockdale Musical Society has pulled off a daunting task which professional producers have shied away from – the NSW Premiere of hit 1981 Broadway musical Dreamgirls.

Inspired by female singing groups of the 60s including The Supremes and the The Shirelles, Dreamgirls tells a story of the musical crossover as R&B changed the face of American popular music, through the rise to fame of a fictional girl group The Dreamettes - later know as The Dreams (though a lot of plot detail clearly mirrors the story of Dianna Ross and The Supremes). It follows their journey from discovery at a Harlem Apollo Theatre talent quest, to back-up singers, to stardom as Deena Jones and the Dreams. The score by Harvey Krieger and Tom Eyen reverberates with the sounds of that era, while Eyen’s book captures not only the highs and lows of the group’s journey, but an essence of the revolution in American music. The Dreamettes initially sing back up to established R & B artist Jimmy Early, played with verve and style by Claudio Acosta. Quinton Rich plays the group’s manager Curtis Taylor Jr. with an appropriate level of manipulative sliminess, while as Effie’s brother, song writer C.C., Stefan Jamal establishes the frustration of an artist who feels his songs are compromised to fit the new sound. Carl de Villa brings comic style to the various MCs throughout the evening.

A fixed scaffoldsetting provides a platform for the show’s band, along with useful levels for the performance and a highly effective upstage entrance. A screen glides into place to enable projections and visual variety throughout the show. Lighting effectively creates the atmospherics of club and concert performances.

The ensemble makes a vibrant, high energy contribution to the show each time they appear. My one real issue is with sound, though I don’t feel the issue lies with the operation. Audibility is not consistent during the dialogue, especially when delivered over music. The problem seems to be rushed delivery of lines by a few performers, especially when other performers, by contrast, communicate their lines with total clarity. Microphones help very little if you speak as if you are having a conversation with the person next to you, rather than conveying a story to the audience.

In the big picture this is a minor issue in a show where the dialogue is sparse, and the essence is numerous great songs, impressively performed.

Director Rod Herbert, Musical Director Anthony Cutrupi and choreographer Joseph Nalty have teamed well with their talented cast, drawing enthusiastic, spontaneous applause from the audience throughout the evening, often more like you’d expect at a concert than a musical, and surely that’s what you’d hope for with this show.

It’s well worth a trip to Rockdale to see this show finally make its Sydney debut.