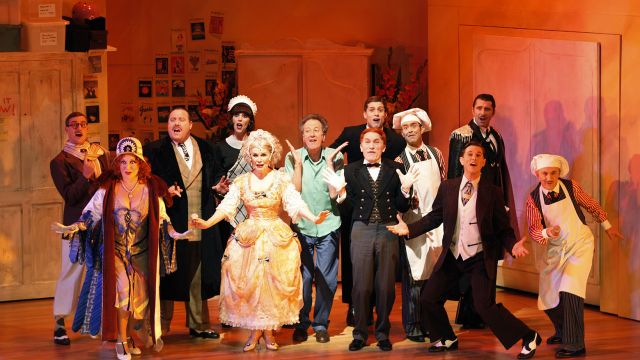 A show queen breaks the darkness, and the fourth wall when the lights finally come up, to enter a dialogue with the audience sharing one of his favorite Broadway cast recordings (fictitious tuner The Drowsy Chaperone) - on vinyl, of course. Hey presto, the show springs to life in his dreary studio apartment, with characters popping through the window, out of the fridge, the foldaway bed and the wardrobe, though his theatre of the mind fantasy soon stretches to painted period sets as well.

Geoffrey Rush revels in the role of Man in the Chair, commentator, pausing the proceedings by simply lifting the turntable arm, to inject comments on the show, the actors, the embarrassing old gags, etc. He’s also a participant, slipping joyously inside the action wherever possible. There’s an infectious wide-eyed air of wonderment each time he finds himself inadvertently drawn into the musical performance, amidst yet unseen by the characters, or joining a dance routine, hoofing with awkward enthusiasm.

For anyone raised on a diet of mega-musicals, The Drowsy Chaperone is a joyous show-within-a-show tutorial in the simpler delights of 1920s musical comedy.

It works superbly as the remaining members of this terrific Australian cast perform even their silliest moments with belief, locked in the world of the 20s musical, and never acknowledging Geoffrey Rush’s close quarter antics. The tongue in cheek fun is delivered with panache and gusto throughout.

As the Follies star giving up the stage for marriage, Christie Whelan is a delight throughout, but simply dazzles in her star turn ‘Show Off.’ Alex Rathbeger is the suave, sometimes hapless, leading man to the tee.

The turntable chips into the fun in its own right too - a wrong recording in the album sleeve, courtesy of the cleaner, introduces a delicious glimpse of another show, an otherwise incongruous yet possibly interchangeable production number, while the stylus, stuck in a groove during a big dance number contributes a nice vinyl only gag.

I confess to owning around 1,000 musical cast recordings, so The Drowsy Chaperone was destined to strike a chord with me. It’s destined to tickle the fancy of musical theatre fans, and many more, I suspect.