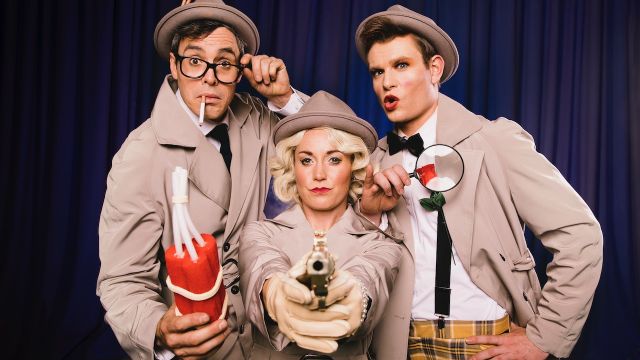 Amy Nightingale-Olsen, Thomas McDonald and Leigh Rhodes are a wonderfully frivolous circus trio who bring sheer delight to the stage, along with great support from puppeteer David Splatt. Their show draws on a variety of styles and traditions which are beautifully fused to create a highly visual and hilarious performance. Dumtectives is a spoof of the detective genre and this is exploited to draw out all its comic potential. The three detectives are on a mission to solve a murder mystery only to find themselves at the centre of a criminal underworld.

The setting and costuming immediately evokes noir and the show opens with perhaps one of the longest death scenes in the history of the theatre. The Corde lisse becomes the unusual location of this prolonged death and sets the tone for the whole show. The characters are vaguely reminiscent of Goddard’s criminal characters in Breathless (1960) reiterating the light-hearted, tongue-in-cheek nature of the show, which also features a very mysterious and elusive femme fatale. Much like Goddard’s film, flippancy can soon turn into betrayal and serious danger. The sheer range of performance and circus skills exhibited in the show is part of its impressive repertoire; mime, puppetry, juggling, balancing acts, acrobatics, Cyr Wheel and even drag performance are all seamlessly blended to create this highly amusing and entertaining performance. The show also exploits a vast range of visual, physical and verbal puns, intensifying the humour and allowing it to be appreciated on a variety of levels.

The fun-loving nature of the show can get quite raunchy at times and some of the highlights included a high-speed car chase that involved some impeccably timed slow-motion mime alongside some great acrobatics. This is cleverly combined with some very effective cartoon-like sound effects. The final face-off showcases the incredible physical dexterity of the performers and brings the show to a spectacular close. This is an exuberant, fast-paced show which delivers giddy, non-stop comedy.