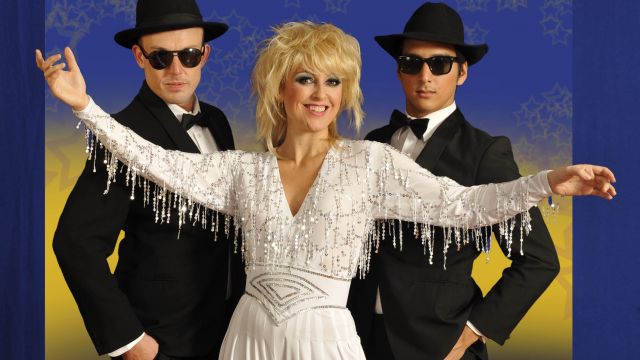 Dusty is CLOC’s first show at The National Theatre, a venue that seats 250 more than CLOC’s old home at the Alexander Theatre, Monash Uni. Clayton. The National is great, but if you’re coming to see the show take public transport because parking around the theatre is terrible.
It’s not surprising to see CLOC presenting Dusty; the book was co-written by its patron, John-Michael Howson OAM. I was very impressed by all the leads. Jodie Symes (Dusty) pulled focus (in a good way) whenever she walked on stage and her performance completely surpassed the company’s “non-professional” standard. Jodie’s presentation was fantastic and brilliantly stylized – she truly was a pioneering rock star. Rachael Whitelaw (Reno) and Samuel Kitchen (Rodney) brilliantly supported Jodie throughout the night, and both of their vocals were a highlight of the evening. Samuel especially had the audience in stitches with his first-rate rendition of “Rodney’s Hairpiece.”
The chorus and audio team were disappointing and not up to CLOC’s usual standard. Mics dropping in and out, pitch issues when the chorus could be heard, and overpowering pre-records distracted from the audience’s enjoyment. Mic issues in particular didn’t help a lot of one-liners falling flat. The chorus would benefit from some good tightening, as there was a lot of sloppy ensemble work that often upstaged the primary action, especially during “The Look of Love.” Some work on accents wouldn’t hurt, either.
Congratulations to the lighting team as I think this was the best-lit show I’ve seen at The National.
Ian Nisbet

CLOC have informed Stage Whispers of the various parking options available in the vicinity of the National Theatre - visit the map on their website - www.cloc.org.au/national_theatre/parking_1.htm