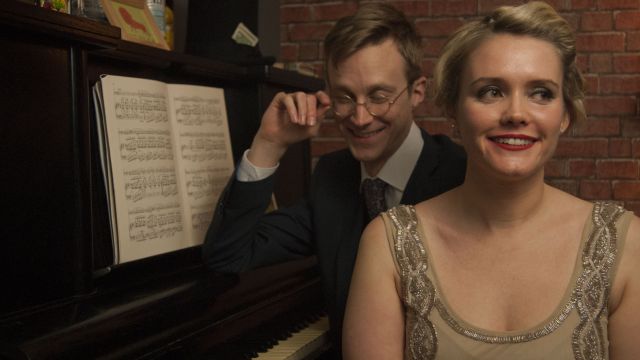 Earnest and Wilde are a mystery trying to help the audience unravel a conspiracy.

Simply known as “he” and “she”, this duo from Sweden and the UK, like so many Fringe performers, fundraised to perform at our festival. “He” skilfully and playfully plays the keyboard, and “she” is a chanteuse with a powerful and evocative singing style. “He”, dapper in a three-piece suit, “she” dressed in a beaded outfit straight from the early 1900’s.

The performance is full of energy, colour and expression and the 55 minutes pass in a blink.

La Boheme, an intimate venue, with its subtle lighting, velvet drapes and old style rugs is perfect for this performance about the event that started the Great War, the assassination of Archduke Ferdinand in June 1914. What seems like an unlikely piece of theatre entertainment is, in fact a wonderfully clever piece of interwoven storytelling and song that draws enthusiastic laughter and applause from the audience.

The dialogue takes the form of banter with subtle humour as each performer takes on the roles of storyteller and also characters in the story of hapless political and familial bumbling and international political ineptness. Indeed, a story for all times, and that is their point.

Complementing the story telling is a black and white slide show that is unobtrusive, but important in helping the audience keep up with the “who is who” in this intricate tale. It is also used to cleverly reinforce the humour and style. Perhaps my only criticism is in the rendition of Austrian Ferdinand’s letters in a very upper class English accent.

Earnest and Wide blend tones from both bygone eras and modern popular music, presented through contemporary songs with a vintage spin. They do, in fact say that “Some might suggest that we’ve made a lot of this up”, but it does not matter in the colouring of the tale.

The singing style is faithfully 1920’s cabaret style and lyrics based on loosely “possible” journals, letters and notebooks create new life through the songs of modern performers. This includes songs including “Crazy in Love” by Beyonce, P Kelly’s “Ignition” and Donna Summer’s “No More Tears” which is cleverly used as a musical duel between the two performers. “Boombastic” reworked is a huge audience pleaser as is the clever play on words used with the name of one of the key characters and the popular “ermahgerd” meme.

The story is cleverly told by stepping the audience through the intersecting lives of royalty and also the ragtag bunch of assassins who in the main, are very bad at both assassination and suicide. Interestingly they explore Ferdinand as both a gentle poet and a deeply romantic man. This helps make the gruesome story, with its predictable tragic ending, particularly relatable for the audience. Rather than hating the assassins, the audience finds themselves sympathetic to this very young, unwittingly thrown together team who reportedly loved their people and died for their ideals.

The final message cleverly uses newspapers from around the world and reminds us that multiple mishaps, and possible conspiracy set the world on a pathway of upheaval never experienced before; a pathway that we still seem to be on.

Audiences may not be drawn to this very entertaining show by its description, and that would be a shame. The research is enormous, but more significant is the entertainment factor. The aim is not a history lesson, but a deliberately irreverent romp. However, if History was taught like this in class, it would be full of fun, laughter and possibly just a tiny bit of debateable fact.