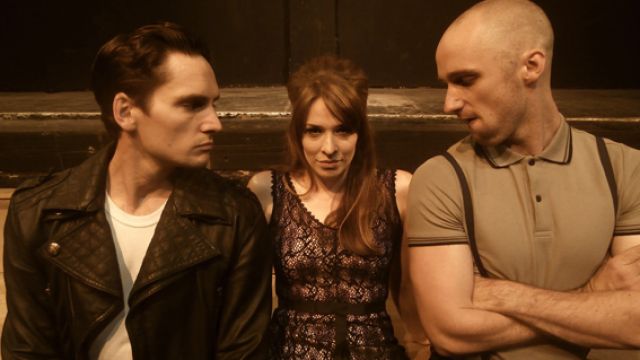 As theatrical endurance tests go, they don’t come much more loaded than this first play by Steven Berkoff, which premiered at the 1975 Edinburgh Festival. As impossible as it is to believe that this was Mr Berkoff’s first play, it signaled the arrival of one of the most game-changing and controversial theatre artists of his time. That we rarely have the opportunity to see Berkoff’s plays performed in Melbourne should be considered a cardinal sin – rightly, and in a most timely manner, corrected by this independent theatre company, who debuted in 2013 with an acclaimed production of The Boys.

Set in London’s East End, where Berkoff grew up, East is a brawling, cruel beast of a play – the perfect combination of quintessential, familiar Shakespearian rhythms, thous and thees and a filthy, obscene rage against the savage impotence of private and personal ambition. It is also perfectly structured, and any writer who aspires to write for the theatre should sit down in front of it for a lesson in not only how important language is in the theatre, but to experience the kind of text that actors write for each other.

In Ms Hanrahan’s impossibly sexy, taut and carnivalesque production, East feels more like 90 minutes of tantalising foreplay than the 90 minutes of what often ends up decimating such vivid anticipation, which is no mean feat when working with a script as devoted as this one is to carnal desires in all their forms and (dis)guises. Eschewing all the obvious choices, Ms Hanrahan’s cast clown, promenade, prowl, growl and in one spectacular scene, are lifted almost magically onto each other’s shoulders as they morph into every make of motorbike imaginable. It is as honorable as an ensemble can be to Berkoff, who has made it his life’s work to challenge and constantly redefine the importance of lyricism and literacy – both vocal and physical – in the theatre.

In concert with Ms Kelly’s inspired set and lighting design, and Mr Croft’s atmospheric projections of scenes of East London, the performances from this extraordinary ensemble are jaw-droppingly good – and it wasn’t until Berkoff’s final, furious slap across my face (don’t we love a playwright who knows how to finish?) that I actually closed my mouth. The ensemble also receives valuable support from the superb young musician Alex Brittan at the piano, who provides an often potent layer of lyricism and supremely accomplished musicality.

Lee Mason’s ‘Mum’ is simply outstanding. Lost in a cloud of duty, obligation and probably more than half a Mogadon, Mason floats through the night in pure and unadulterated obligation to her racist, misogynistic husband – the excellent buffoon Chris Bunworth. Mason’s is a beautiful, understated performance – and the scene in which she shares her private fantasy world while her husband snores behind her is stunning.

Mike (Adrian Auld) and Les (Michael Argus) deal with the lion’s share of the script brilliantly, delivering two outstanding, honest, and at times hilarious, performances that, thankfully, avoid stereotyping on every level. What we have here, instead, is flesh and blood (both of which are described in punishing detail). No one-dimensional East Ender thugs these boys. And when they finally introduce themselves to you by name, you’ll be desperate to remember them.

Marissa O’Reilly’s performance as the contradictory Sylv is an absolute revelation. I must admit that I spent the early part of the performance waiting for Ms O’Reilly to start ‘acting’. If I hadn’t been so utterly captivated by her fascinating and complex performance, I would probably have preferred to look away – such is the level of honesty and clarity in the faultless interpretation that this young actress has crafted.

Which brings us to the value of honesty and integrity in the theatres – values that are vanishing more and more, every day in our world and our lives. That may be just one of the reasons why this rage against the frustrations associated with our own anonymity is important. We are, each and every one of us, worthy of something. In East, and in this illuminating production of it, it is now more critical that we understand what and why.