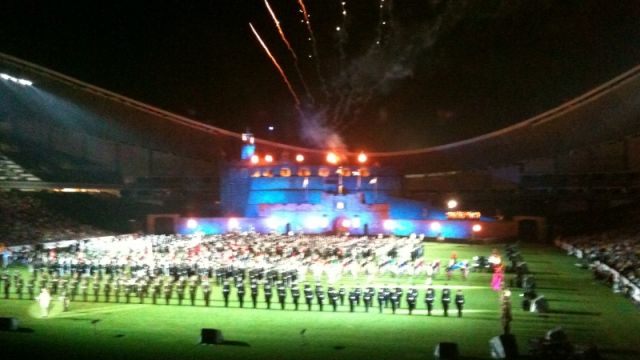 After watching the energetic bagpipers in their rehearsals march up and down, and up and down some more, on the ABC’s 730 report, I must admit I wasn’t exactly jumping out of my kilt to see the much hyped Edinburgh Tattoo.
Add to this the threat of rain and it had the potential for a damp evening.
I did, though, end up enjoying the spectacle, and when the rain came it added to the entertainment.
What surprised me was the choreography.
Firstly those in the audience, not under cover, who all found identical raincoats to put on.
Then there was the dancing on the Football Stadium.
The Moscow Military Conservatoire used a xylophone as their star instrument and performed a very stylish jazz dance.
The New Zealand Army band were the biggest hams, traversing everything from Hava Nagila to the Haka.
The Trinidad and Tobago Defence Force Steel orchestra had an awesome percussion sound and positively gleamed across the grass.
The Norwegian Army band were skilled at slapstick. They did a very amusing dominoes falling over routine.
What made me cringe was the volume of Australian music. Yes, the opening march of Along The Road to Gundagai was a treat, but by the time every Australian tune from the theme from Neighbours, to Waltzing Matilda to Tie Me Kangaroo Down had been performed, it felt a bit over cooked.
But that appears to be the nature of this military band jamboree.
It was finished off with a fireworks display that was so close and loud that it must have sent the many hundreds of zimmer frames and pacemakers present in the Stadium into a frenzy.