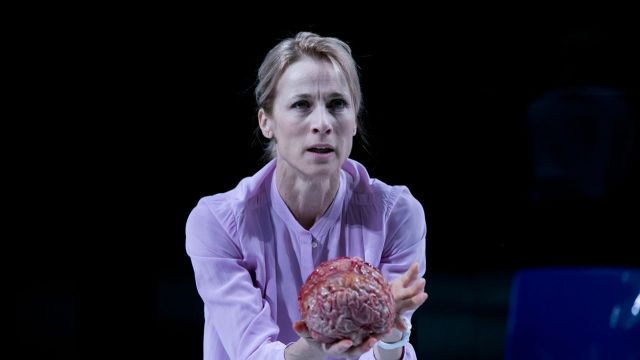 You’ve probably seen Angie Milliken on the cover of the current Stage Whispers holding a gleaming human brain. The ‘alas poor Yorick’ moment is from Lucy Prebble’s adult investigation into love, depression and drug trials; and Ms Milliken engages the brain in a desperate conversation even more troubled than Hamlet’s.

Prebble, barely 30, had this absorbing, award-winning play produced at Britain’s National Theatre in 2012, and it’s great to see it in Sydney and Brisbane so soon — and next month with a different cast and director in Melbourne.

This STC/QTC co-production is brilliantly directed by Sarah Goodes with four actors the MTC will be hard-pressed to better.

Lightly Australianised, the script is constantly challenging. Two paid volunteers begin a five-week drug trial in a sealed hospital ward. Intense psychology student Connie (Anna McGahan) and charismatic drifter Tristan (Mark Leonard Winter) come under the care of psychiatrist and trial leader Dr. James (Milliken). They (and we) don’t know what drugs (if any) they are being given or what effects are being monitored. Even Dr. James is missing pieces of the trial jigsaw, for it emerges that she herself is being monitored by another doctor, Toby (Eugene Gilfedder), with whom she shares an unhappy private history.

All (and then some) is revealed on a sleekly minimalistic setting by Renée Mulder, with cutting edge lighting by Ben Hughes and a terrific non-stop soundtrack by Guy Webster. There’s absolutely nowhere for these four actors to hide and they certainly deliver the goods.

Milliken is here returning to the STC, a former happy hunting ground, for her first performance since The Real Thing in 2003. Unshowy and taut, she inhabits the role of depressed, lonely Dr. James with deep commitment. Welcome back, Angie.

If you haven't seen the cover of the latest edition, including Frank's feature on Angie Milliken, Sigrid Thornton and the Effect, click here to find out more.