Eleanor’s Story: Home Is the Stranger 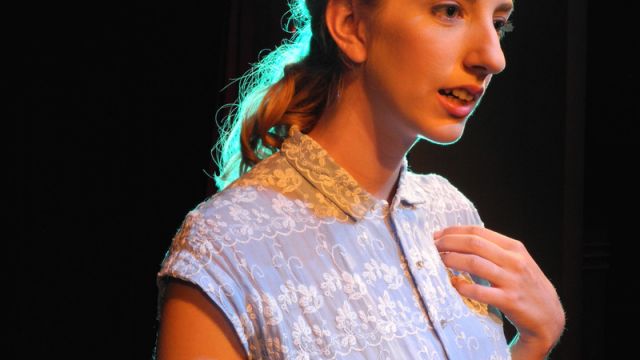 Eleanor’s Story: Home Is the Stranger is biographical. A sequel to Eleanor’s Story: An American Girl in Hitler’s Germany, it is a 50-minute, one-woman show presented by Eleanor’s granddaughter, Ingrid Garner.

In the fall of 1939, at 9 years old, Eleanor Ramrath Garner and her family left New York on the SS Hamburg bound for Germany. A new job and a secure financial future awaited her father and his German wife in Berlin. Halfway across the Atlantic, Hitler declared war on Poland. Their return to America became impossible until all suffered the torment of the war and the unspeakable terror of oppression, deprivation, bombings and death that are the hallmarks of war.

Adapted for the stage, this second part from Eleanor’s award-winning autobiography details her youth as she struggles to return home and reclaim safety. It is also about her identity and the stability of family in post war times in which refugees from Germany were regarded as novel.

Eleanor introduces herself to the audience with, “In the Spring of 1946, I was an American who had survived a war in Berlin.”

Courtesy of her feisty and courageous mother, Eleanor and her family survived the brutalRussian invasion and the horrors of Soviet occupancy and it is not until the war ends that Eleanor, her father and brother James are repatriated to the USA. Eleanor makes her journey home in an outfit made from her bed sheets and wearing patent leather shoes that were a gift from the Red Cross. She sails into New York, where the Statue of Liberty’s famous inscription, ‘Give me your tired, your poor, your huddled masses…’ reaches out to her.

Thinking she was home at last, Eleanor’s battle with her past, present and future had just begun. The crisis for her, and for other refugees who had fled war-torn corners of the globe, highlights for us all that then, and today, the privation, horrors and terror of war never leave the survivors. Garner tells a rare story. Eleanor’s family were American and this was often their shield, but America had ceased to be what they knew as home.

Eleanor’s story is poignant and powerful. Ingrid Garner segues seamlessly between characters, never imitating, always becoming them. She sits, legs akimbo as her father and brother, then moving back to a womanly pose as Eleanor and her mother and aunt. Garner is slender, believably a child of the rationing era. Her skill with mime is outstanding and evocative as she takes the audience to the place and time with carefully chosen tone, voice, gestures and effortless movements. Her dress is simple and echoes the period. Every nuance is choreographed and essential as she shifts between Eleanor’s memories and experiences of world war and her own private war.

Trauma finds her in mundane moments. The sound of the school bell, so like bombing sirens, sees her huddled helplessly on the floor, her face and whole body convulsed in terror. An innocent teenage infatuation and kiss turns, in a heartbeat, into a terrifying memory of women being raped, reminding us that the “real world was far more threatening than ghosts or goblins”.

To relieve what is a deeply sombre story, Garner shares the ‘sock dance’ from the high school dance and it is here that we see the joyful teenager, having fun, almost carefree…but just for a few moments.

Lighting and sound effects are both well used. The audience hears broadcasts and music of the time, the sounds of ships, nature and people, but we also see Eleanor’s world turn red with flashback stories of horrific bloodshed.

The staging is simple, and here lies my only criticism. Two chairs, obviously modern, are strategically used to create scenes and effects and also dominate the set. They were a lost opportunity and a distraction for this reviewer, as was the trunk, that despite travelling the world in the 1930’s and 40’s, looked pristine and modern.

Having said that, Garner’s performance is flawless. It could have been another blame-laden survivor story. Instead, it is a courageous and uplifting tale of an extraordinary, ordinary young woman.